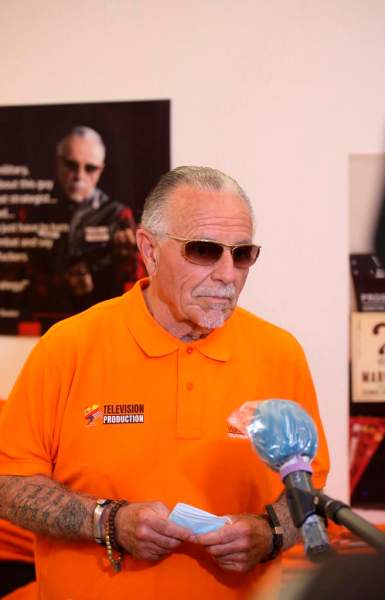 Hollywood Television productions return to Malaga with the casting today for a new series “Marked- The Unforgiven” at the “hip” Soho CaixaBank Theater.

On Monday morning, 38 Spanish actors and actresses were chosen from over two thousand applicants passed through the theatre owned by Antonio Banderas hoping to be offered one of the coveted roles available for the new television series.

The television show “Marked -The Unforgiven” is scheduled to film in Spain in the first week of August in La Malagueta, Marina y Plaza de la Constitución in Málaga and in Desierto de Tabernas and Cabo de Gata in Almería. The show is about a California biker club adapted from the Amazon bestseller entitled “Marked” written by George Christie, former president of the Hells Angels of Ventura, California, and author of three different bestsellers.

The production was the brainchild of Sutish Sharma, a former BBC executive and CEO of New Street Pictures, Pinewood Studios, London, England, and Pat Andrew of Wanda-Halcyon Television, a former executive of Spelling Entertainment Inc. where he worked on the successful Melrose Place and a former personal assistant to Hollywood icon Sydney Korshak in California. Andrew was recently named one of the top producers to watch out for in Europe in 2020.

The production wanted to send a special thank you to Antonio Banderas for introducing us to the great potential of Malaga and the television industry in Spain. Allowing us to use the theatre to hold auditions is something we are very grateful for and makes the audition process much more enjoyable for the actors and we are happy to report that the Soho Theatre is as professional and beautiful as any theatre in Hollywood.

The production company received more than 2,000 requests from Spanish actors in the first casting call. This first call was done online to be able to respect the rules of social distancing, due to COVID-19 as it would have involved a large agglomeration of people.

Only the 38 selected have been called to the final casting. Among those selected, are actors known for participating in Spanish and international productions such as “La que se Avecina”, “Star Wars”, “Élite” or “Velvet” among others.

Suthish Sharma, one of the producers has commented: “The quality of the Spanish actors, even acting in a language different from their own, is very high and the decision will be tough because there are many profiles that fit the roles perfectly. Once again, Spanish actors have set a very high standard.

The character of Jack Crest, the young war hero who returns to America has been cast in Hollywood and that high-profile lead actor will be announced in two weeks.