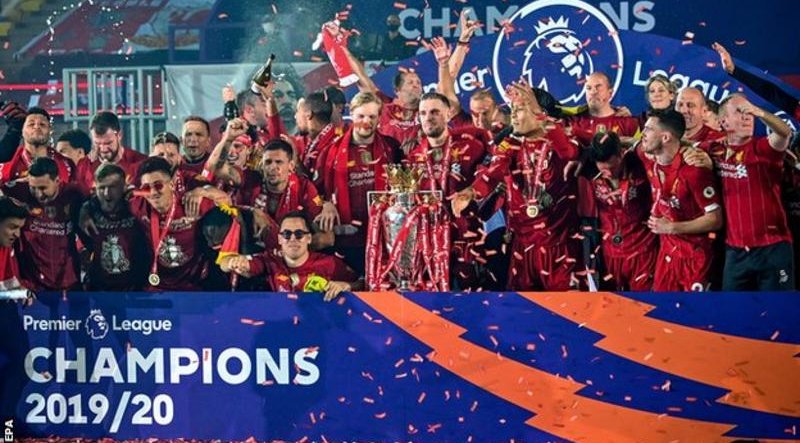 Liverpool lifted the Premier League trophy at Anfield, with some cheeky antics slipping through the net. image: YouTube

Liverpool’s players finally got their hands on the league trophy on Wednesday after a 5-3 win over Chelsea in their last home game of the season.

The night that Liverpool received the trophy was always going to be special and Klopp’s team summoned an attacking performance befitting of the occasion, as five separate scorers helped secure the win over Chelsea.

Naby Keita, who crashed home the opening goal, embodied Liverpool’s spirit and desire and he is one player Klopp is adamant will improve considerably over the next 12 months when the ultimate target will be to defend their trophy.

‘It was special – absolutely special,’ said Klopp. ‘We don’t have to compare as we never have done it before. We all know it could have been different. It could have been worse, for example, if we never won the game. The boys gave us the opportunity to have a really special night.

‘I think a lot of people thought before the game one team fights for the Champions League, the other team is maybe already on the beach. But these boys are so special. I could not be more proud.

‘Throwing a performance like this in on the pitch tonight… it was an open game but nice, nice goals. Incredible goals, super footballing moments. I loved the game! We could enjoy it and we will enjoy the rest of the night.’

Klopp’s side won the Champions League, Super Cup and Club World Cup titles last year, but the German said that their rivals will look to close the gap.

“We’re champions of England, of Europe and the world. I know what that sounds like, but it’s the truth. It’s unbelievable, to be honest,” said Klopp. “We’ll not stop. We have internal challenges and each player can improve. Five years ago I asked the supporters to believe us. I told the doubters to become believers, they made it happen.” Liverpool can take their league points tally for the season to 99 with victory at Newcastle United on Sunday”.

Klopp’s side can now hit a maximum of 99 points this season if they get a win on the last day of the season against Newcastle.

It would also see them better last season’s tally of 97, which was not enough to beat Manchester City.