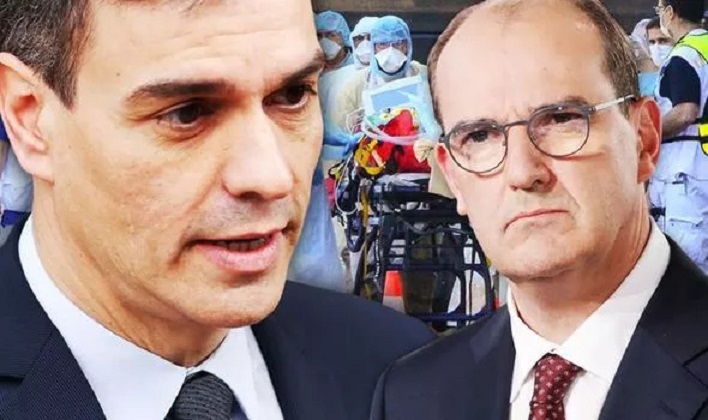 The French President Immanuel Macron is expected to make a serious announcement on Friday that is likely to have far-reaching effects on the business communities of Britain, France, and Spain.

URGENT Zoom discussions are reportedly underway between the three countries involved, trade bodies have expressed their concerns that a border closure would cost hundreds of millions of euros and that some companies would not survive it.

A spike in cases in the Spanish region of Catalonia has forced the French government to consider the border closures. The borders between France and Spain reopened on June 21 after three months of confinement on the Spanish side to combat the virus. But now, French Prime Minister Jean Castex has said the government will not rule out closing the borders again following the new outbreak.

Mr Castex said: “We are monitoring this very closely, here in particular, because it is a real issue that we must also discuss with the Spanish authorities.”

Residents in Catalonia must “stay at home if it is not essential for them to go out,” Mertixell Budo, the spokeswoman for the Catalan regional government said. Although it is only a recommendation, Ms Budo hopes this will stop the virus spreading and cause stricter measures. She said: “We must go back a bit to avoid total confinement of the population in the coming weeks.”

The regional government has imposed the closure of cinemas, theatres, nightclubs as well as prohibiting meetings of more than 10 people with visits to retirement homes also banned. Carles Gispert, a 40-year-old DJ in Barcelona, said: “If people had done everything that authorities recommended, we would not be here.

“What I see is that we have returned to the situation of March, everything is out of control.”

Business leaders from the three countries have already lodged their views saying a return to closed borders would the “last straw” for haulage companies – never mind the factories and outlets they were delivering goods to.

Spain alone exports over €20 billion worth of goods to the UK each year and the UK delivers cars, medicines, machines – the list goes on. France itself has/had a thriving import-export trade with the two countries before the crisis also.

If you liked reading this article, ‘Tensions Rise between Britain France and Spain as Border Closure could Spell Disaster for Trade,’ please make sure to like, share, and comment!