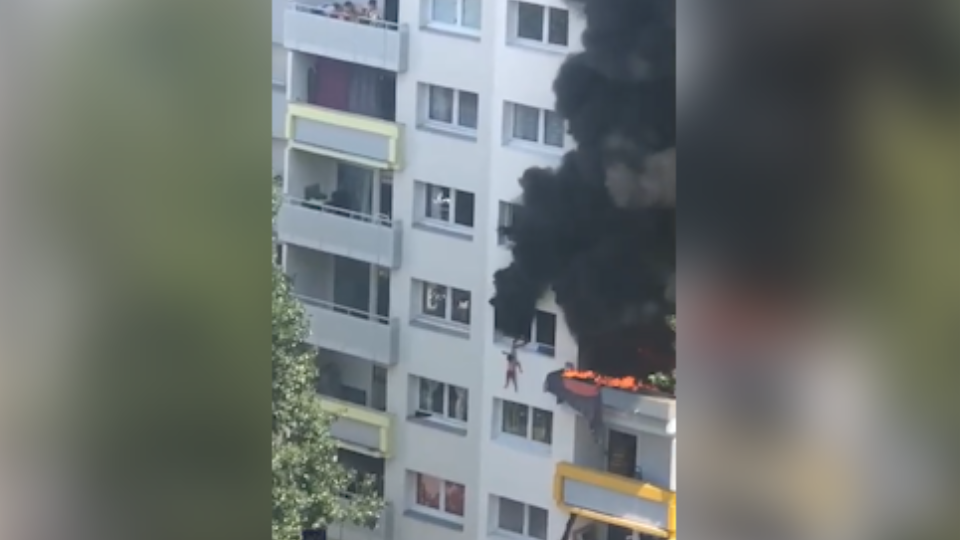 Two young brothers escaped certain death from an apartment fire by jumping 33ft from a window to the ground.

THE children, aged 10 and three, were caught as they fell towards the pavement in the south-eastern French city of Grenoble on Tuesday. French media reported both were unharmed by the dramatic escape but might have suffered from smoke inhalation. Both were taken to hospital along with 17 other residents of the building in Grenoble, south-eastern France.

Video (below) of the dramatic rescue showed the younger brother being dropped from at least three storeys up, as onlookers screamed, the 10-year-old then let himself fall into the arms of those below as smoke billowed from the window and flames engulfed the building.

A neighbour who lives in a nearby apartment complex, which is located in Saint Martin d’Heres on the outskirts of the city of Grenoble, captured the dramatic escape and rescue on video. The video shows a crowd of people gathering below the third-floor apartment unit on Tuesday afternoon as flames and thick, black smoke billowed from the window and balcony of the building. Video credit: YouTube

Athoumani Walid, a 25-year-old student who suffered a broken wrist from helping catch the children, said he heard screams and went out to investigate after seeing the fire from his nearby apartment and rushed to help along with four or five other people.

“We didn’t know what to do, we wanted to break the door but it wasn’t possible.” They then went outside and shouted for the boys to jump into their arms.

Although he initially feared for the boys, “when they jumped, fear disappeared,” Walid said. “What mattered was to catch” them, he added.

Walid said he hopes the rescue will change perceptions of the Villeneuve neighbourhood, which has a large immigrant population. Dozens of firefighters were said to have responded to the scene to extinguish the fire. Seventeen people were reportedly injured during the incident, according to local media.

Grenoble’s mayor, Eric Piolle, posted a heartfelt message on Facebook the same day to congratulate those for their “heroic rescue” in helping catch the two children and to wish a good recovery to those hurt in the fire. “Hand in hand, they allowed the two little ones to get out unharmed from this drama,” Piolle wrote on Facebook. It’s unclear what caused the fire.

If you liked reading this article, ‘Watch This: Two Young Brothers Jump 33ft then Caught by Crowd From Burning Building,’ please make sure to like, share, and comment!