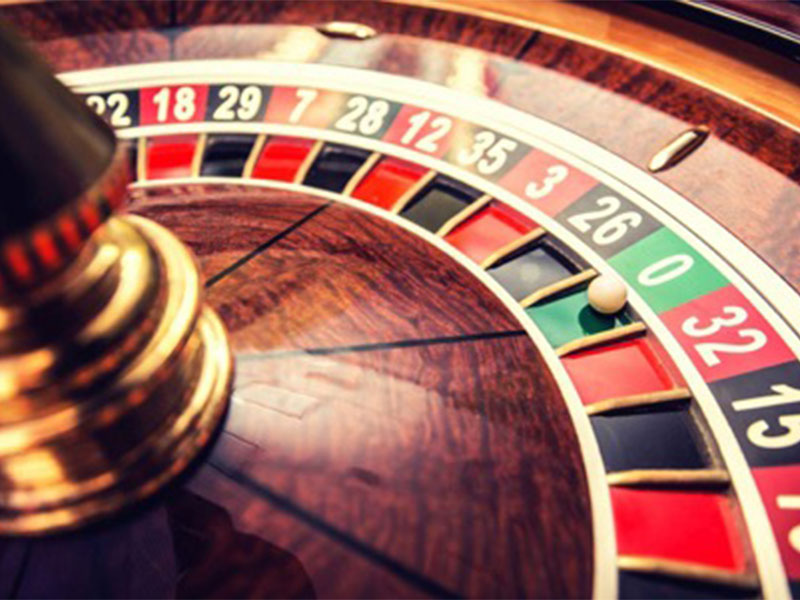 Human beings are creatures of habits. Gambling should be considered a major expression of that statement, thanks to its inherent habitual component.

Covid-19 reshaped every conception of normal habits, and gambling by extension had suffered from strict regulation in order to protect customers and the industry as a whole. thereby changing again how gambling is practised and perceived.

Again, COVID has been created before and after in every social,  economical, and even psychological aspect of the UK landscape. As gambling being such a rooted part of the UK culture, the Gambling Commission, in its supervisor role has published an advance on how Covid-19 has impacted the gambling behaviour and the conclusions reported.

To determine the consumers’ trends, the following variables are the ones to address the gambling context: how much money they can dispose of, how time is spent and how they feel.

Research by Savanta reports a significant financial impact, with the same research noting that 39% of people have seen their disposable income decrease. something to expect with furloughing and fewer working hours.

One of the major changes that Covid-19 produced is the increased time spent at home. This has produced a shift toward engaging news and entertainment. Those that have gambled in the last 4 week, compared to national average have:

Overall, 23% of the population feel their mental health, in general, has been negatively affected. Economical pressure, idleness and increasing worries are taking their toll across the UK.

Following the Prime Minister order On 20 March, all retail gambling venues closed.  The measure forced a stopped 50% of the overall market (excluding lotteries) activities. While it is still possible to purchase National Lottery tickets in a retail environment,  there has been a small decrease in retail outlets availability and a decline in consumer shopping journeys.

provides a clearer picture of the Commission comparing Operator data collected by March 2020 with March 2019 provided an initial insight into the changing shape and size of the market.

a. Overall, fewer consumers are gambling

Compared to the initial outburst over online gambling the lockdown period does not appear to have attracted many new consumers to gambling. According to YouGov research from 16-17 April, of all adults surveyed

Thereby, having a -1.8% customer base contraction during that period.

Overall active player accounts follow the Gamstop-free trend. Operator data indicates a 5% decrease between March and April 2020, driven substantially by real event betting along with non-Gamstop online casino site provided by CasinoGap.org (active players down 55%), and reflecting the lack of top-quality sport during April, due suspensions and cancellations of almost all sporting events.

Despites fewer consumers taking part in sports betting, the operator data indicates that the participation has not fallen as drastically as anticipated at the beginning of the crisis, which can be related to a switch towards more obscure markets like Japanese baseball or Belarus football league.

The trend is reflected in the YouGov survey conducted from 16 April to 7 May. With the exception of significant decreases in participation in National Lottery draws and sports betting, there has been a significant increase in those playing National Lottery online instant win games.

Despite its initial fall, National Lottery sales have managed to hold up reasonably bouncing back to a level slightly below normal. Overall, these facts determine troubles at some industries such as gambling at even with a decreasing pool of active gamblers; the most profitable ones have relatively stable participation in the past-four-week.

b. Some people, who are gambling already, are trying new products

There has been a year on year trend toward an increase in the number of activities engaged especially by online gambling consumers. During April 2019, 26% of consumers appeared to engage in more than one online activity, a figure which rose to 42% during April 2020.

Studies have dictated that an increase in the number of gambling activities can be correlated to a higher level of moderated-risk and problem gambling. However it is important to note that the YouGov survey only considers online gambling as offline activities weren’t available during the lockdown period. 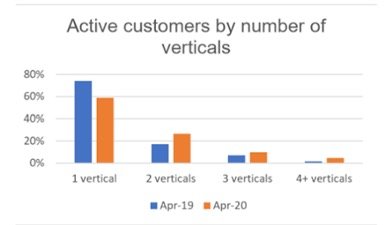 The lockdown period has also promoted an increase in range of activities for some; the YouGov research shows that around a third of past four-week gamblers have tried one or more gambling activities for the first time during the lockdown.

This figure rises to over half (54%) of engaged gamblers. Over those participating in three or more gambling activities in the last four weeks:

These results point the National lottery draws as the leading new activity for engaged gamblers in the last four weeks. Online operator data concluded that certain activities are the ones experimenting major increases player activity. 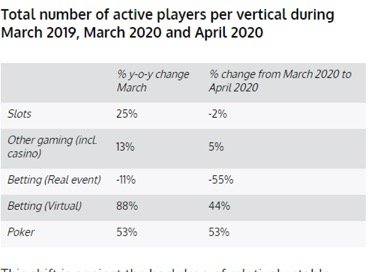 Variation among periods variation can be related to a level based growth occurring from year to year, but also can be largely addressed towards a preference of those activities with a faster play cycle and availability compared to real event betting.

While there has been significant growth on remote gambling,  there has been a shift in the slot and casino sector. The shift can be linked to a relatively stable advertising awareness, where the YouGov research shows that 34% of adults recalled seeing marketing for online bingo, casino or slots games in the last four weeks. A sizable change if compared against the 39% of the pre-lockdown research.

c. Overall gamblers claim to be playing products at the same rate or less, but a majority of those who have participated in 3 or more gambling activities in the last four weeks claim to be spending more time or money on one or more activities.

Key indicators of this growth are the average bets per customer on some products.

The volume of activity on certain products appears to still be growing. We have seen a slight shift compared to pre-COVID-19 reports for both slots and casino products, which are traditionally the largest constituent parts of online gaming.

While active player numbers are growing toward more appealing gambling sectors, the number of bets placed is now growing at a faster rate. This indicates both an overall growth in the product, and an increase in the average number of bets per customer. 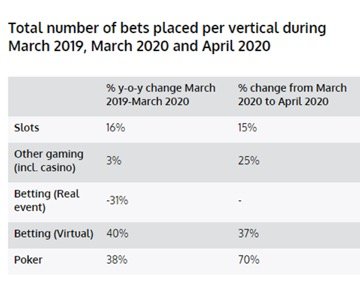 The trend shows a clear shift toward other sectors of gambling. As the YouGov survey reported that a larger drop of players and available options to bet, the industry has only suffered a slight shortage in its activities and revenues. 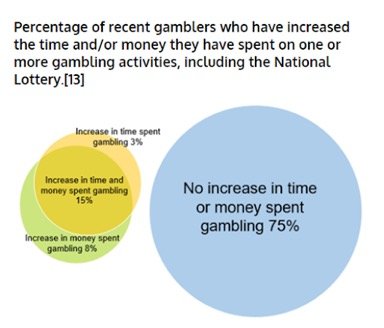 When compare the attitude change on engaged players  a different profile is presented. A report indicates that more than six in ten (62%) have increased either the amount of time or money they have spent on at least one gambling activity, including National Lottery products.

However, this indicator doesn’t conclude that their participation time and spending has been increasing,

d. We are also seeing an increase in the number of sessions over an hour.

With all facts in consideration, the gambling industry has remained in good shape considering the impact of COVID-19 over other industries, with only negatively impacted sectors that are exclusively depending on other activities such as sports betting.  Even when there is a shortage of active gamblers there has an element of consistency: engaged players are the ones who sustain the industry.

Finally, we can conclude that the increased time engaged gamblers have to spend in a home is dedicated towards gambling activity with increased frequency in a session of over an hour which can indicate an increased risk to further from moderate-risk to problem gambling in the surveyed population.

On all, Covid-19, along with war, economic recession and even prohibition is another proof of how the gambling industry is a business that won’t lose its edge no matter the odds against.