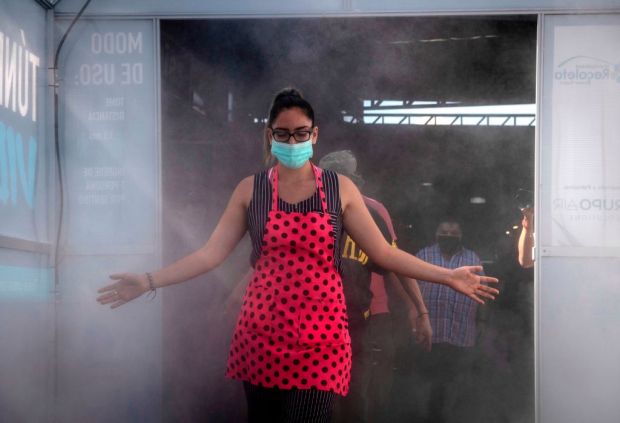 Simple and effective, why are governments not installing these everywhere? Pic: Instagram

Until such times as a vaccine is found to the coronavirus, there are a load of protocols in place to try to slow the spread, one solution which has been pretty much ignored is HOCI, (Hypochlorous Acid), which has been used to great effect already in South Korea for front line workers

Using a ‘fogger’ tunnel at the entrance or exit of any buildings, or shops, or even tunnels in the streets, (no bigger than a bus shelter), could disinfect literally hundreds of thousands of people every day, by simply walking through the fine mist.

There is a pressure pad on the floor which triggers the spray, (which is completely harmless to humans), as people walk through.

It could be used at stadiums, and concert halls, cinemas, and theatres, anywhere there is the possibility of large crowds gathering, almost totally wiping out the possibility of the virus surviving, and allowing the return of the spectators, or audiences to big events.

Darren Reynolds, professor in Health and Environment at the University of the West of England, in Bristol, has been trying to persuade the Government to use HOCl in the fight against Covid-19.

He told the Daily Mail he got as far as making contact with the relevant office at the Department of Health and suggested HOCl could be made cheaply and in vast quantities but it came to nothing. “We should have used HOCl from the very start. It would have made a huge difference – but it’s still not too late,” he said.

“There seems to be a resistance to new ideas. Our inability to respond quickly to innovation is deeply frustrating.”

This makes no sense to me, this spray works, (a bit like the signage on ‘detol’ this stuff kills 99.9% of all known germs, bacteria and viruses), and it is harmless to humans.  So why are the governments all over the world not grabbing this idea and running with it?

There have been no responses to emails sent to respective government departments as yet, I will keep you up to date on any advances.