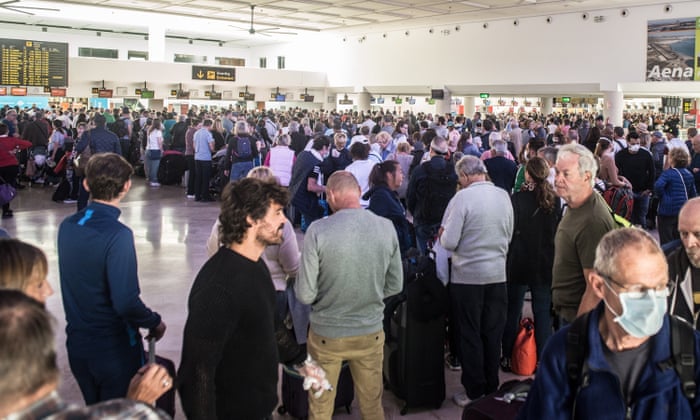 THE UK removed Spain from its ‘Safe List’ last night leaving thousands stranded and unable to get back to the UK without going into isolation – a newlywed couple heard the news as they were landing at Malaga Airport!

Alan and Sue Price from Luton landed at Malaga airport last night for what they thought would be a blissful two weeks of sun, sand, and sangria. They were “absolutely devastated” to learn that their belated honeymoon break could see them losing their jobs when they return to the UK.

Alan was gobsmacked at the news, he said: “We both work at a food production company, we are shift workers and it took us months to get the time off. The wedding was a shambles, we couldn’t invite all our friends, we couldn’t shake hands or hug anyone – there was no live music allowed, Sue was in tears but I promised her I would “whisk her away” to sunnier climes where we could relax and forget about the virus, how wrong was I!

“We took a taxi to the hotel in Marbella and felt relieved after a shower and a visit to the bar. It was so late I didn’t want to bother my manager and decided to call him this morning. He was NOT happy, especially as there are two of us – “Well, with your jobs you can’t work from home can you, now what am I supposed to do with you lot stuck in Spain. You know I gave the other workers time off for when you were supposed to get back!”

“So there it is, how can we enjoy our time here now that we think we will be out of work when we get back, it’s making us ill thinking about it. The thing is, why did the government announce it so suddenly on Saturday night of all times? I reckon thousands would have cancelled rather than risk the trip – it just doesn’t make sense and they will definitely NOT get our vote at the next election!”

Boris to face the music

There are literally thousands of people at this very moment in Spain on their holidays wondering what to do. Should they try to book a flight and return to the UK asap to keep their jobs or let the holiday run its course and face the music when they go back? It was as recent as June 27 that the government announced there would be no quarantine for arrivals from Spain. Whatever they decide it has generated a lot of bad press towards the  British government and one that surely will have an effect on the next election. TW