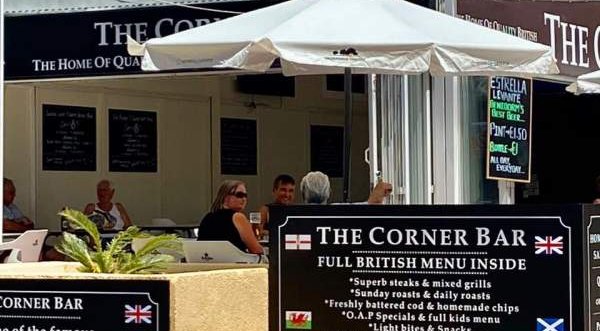 A BRITISH bar owner in Spain’s Benidorm has been left devastated by the news of the quarantine law announced by Boris Johnson’s government late Saturday night. The grim reality of the situation is starting to take its toll.

Sharon Price, who runs the Corner Bar pub-restaurant in Benidorm Spain, was devastated to hear the new quarantine rules the UK government suddenly announced on Saturday night. She posted to social media this message:
As a British business in Spain, we are devastated by yesterday’s news. We genuinely did not see the UK government’s decision coming. Just literally four days ago Scotland told everyone it was now safe to come to Spain, now it’s not according to them.
We know what this will mean for the summer season here but we are also now very concerned about the consumer confidence of Brits looking at booking holidays to Spain at all in the near future. Once again like last time the news came with so little notice for tourists and businesses alike.
We only on Friday employed another member of staff taking us up to six, plus us, all relying on a wage from our business. We also fully restocked the bar and kitchen as day by day things were improving in our area. There will be many, many thousands of people in Benidorm alone now who were hoping to be back in work in the near future whose hopes have now been dashed with no idea what comes next.
On Friday there were 123 reported deaths in the UK, three in Spain, if anything we thought the decision would be the other way round. (Brits quarantine when arriving here).
Spain is a huge place, and in our area, as we’ve been saying in recent weeks, things are very much back to normal.
Clearly there are rises in numbers in certain places, (all seemingly at the moment very far from Benidorm), and of course, the main thing from all this is that Spain keeps this spike under control, limiting the amount of infections and more importantly deaths. (Of which there has been 10 in the last seven days in comparison with hundreds in the UK).
Benidorm was just starting to breathe again, there really was life back in the streets. Even last night, that Saturday night vibe felt like it was back and the streets were busy. Benidorm will come back from this, it’s just going to take longer than we thought.
We will carry on @ The Corner Bar
We are determined that this coronavirus will not beat us and we must try and stay positive, albeit this is obviously becoming more difficult as each news headline comes out. We continue to serve our Full Menu, All Day every day 9am-9pm and hope that this is just a blip on the long road back to recovery.
The Corner Bar Benidorm.

This positive message goes out to all British bar owners across Spain, things are slowly getting back to normal and Spain will defeat the virus over time. Billions are being ploughed into the economy as the EU divided up its rescue package last week.
As one bar owner said to me on the Costa del Sol recently: “If we pack up and go, what are we going back to? We have been here 20 years, this is our home, we will fight for our home”. TW