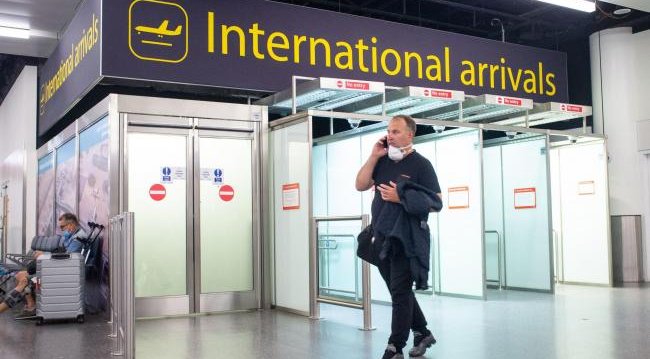 Plans are being considered to cut down arrivals from Spain quarantine to 10 days. image: Twitter

Quarantine ‘to be cut to 10 days for holidaymakers returning to the UK from Spain’ after backlash from travel firms and businesses.

THE quarantine period for people arriving from Spain or other countries with high coronavirus levels is at present 14 days. This period could reportedly be cut to 10 days under plans being looked at by ministers.

Returning travellers would need to quarantine for eight days before being tested, under new plans being considered. After that they would only need to remain in quarantine for another two days should they test negative, according to government sources.

It is understood that ministers are also thinking of instructing everyone who has returned from Spain since July 23 to get tested. It comes as the government was told to get a grip on summer holiday ‘confusion’ after the Balearic and Canary islands were added to the list of places where only essential travel should take place.

The government is also considering telling everyone who has come into the UK from Spain since July 23, including returning holidaymakers, to take a coronavirus test, the report added. Britain dealt a new blow to Spain on Monday by extending guidance advising against all non-essential travel, which already applied to mainland Spain, to include the nearby Balearic and Canary Islands.

Business leaders on Spain’s Costa del Sol and Costa Blanca have called on the Spanish government to press harder for these changes. The quarantine rules are being considered “a damaging blow” to Spain’s tourism industry, said one minister.

Jet2 cancels all flights to Spain

The decision yesterday by Jet2 to cancel flights to the whole of Spain has caused chaos throughout the travel industry. Thousands of British holidaymakers are now in a desperate rush to get back to the UK. Holiday firms are inundated with calls for help and phone lines are jammed. Some companies, like Jet2, have told customers NOT to call them as they will contact them directly. According to the outraged messages on social media however, this does not seem to be the case!