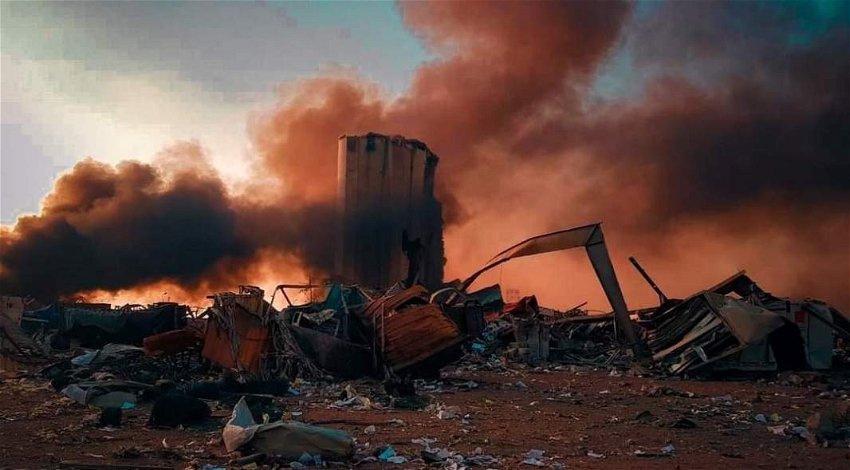 Prayers are being sent to the families of the victims who lost loved ones in Beirut from well-wishers on Spain’s Costa del Sol.

OVER 100 people are now thought to have been killed in the massive explosions that ripped through the Lebanese capital yesterday – thousands more are in hospital, many in a critical condition.

It is now understood that a ‘welder’ had sparked the warehouse fire that ignited 2,700 tons of highly explosive chemicals ‘seized from a ship’ causing a three kiloton blast – a fifth the size of the Hiroshima bomb. The video below was released on Twitter shortly after the explosion occurred, so powerful was the blast it threw the man, Fady Roumieh, across the room.

Margeret Dickinson from Fuengirola wanted to pass on this heart-wrenching message for the victims of the explosion in Beirut:

“I had to email this to you at EWN as i cannot speak for emotion – I have cried all night for the victims, girls, boys, mothers and fathers, grandparents and most of all, little babies. Oh my god, the thought of it, one minute alive the next second dead, I can’t bear the thought of it. I pray to God they are all in heaven now, in peace and without pain. All I can say is that we here in Spain send messages of love and hope for the swift recovery of the people still in the hospital, and to tell them we are thinking of them, they are NOT alone.  We really hope their families are safe – Thank you.”

John Humphries from the Costa Blanca wrote: “Dear EWN, could you please publish this message so all your readers can come together at 8pm tonight in a short prayer for the victims of the Beirut bombings.

We pray for victims of violence and their families, that they may experience our love and support and find comfort in your compassion and in the promise of eternal life.

We also hold in prayer all of the times that we have experienced harm, in any form.

Grant us the courage to seek out restorative encounters to bring about your vision of healing and unity that we, your people, may no longer be divided by the hurt we cause one another in our brokenness.

Locals in the town of Fuengirola on Spain’s Costa del Sol were visibly shaken by reports of the explosions in Beirut.  People were seen with their heads dropped and in tears, some finding it too hard to take in – such was the scale of the devastation. Lebanese restaurants in the area closed on the news of the explosions, many are believed to have relatives or friends living in the capital, screams of disbelief were reportedly heard from at least one establishment in Fuengirola last night.

Israel has offered humanitarian aid to Lebanon after explosions at a Beirut port killed dozens and injured thousands, in a rare show of support for the enemy country.

Donald Trump said US military generals have told him they “seem to feel” the massive Beirut explosion, killing at least 100 people, was a “terrible attack” likely caused by a bomb.
Mr Trump was asked why he called it an attack and not an accident, especially since when the explosion was reported that Lebanese officials say they have not determined the cause of the explosion.