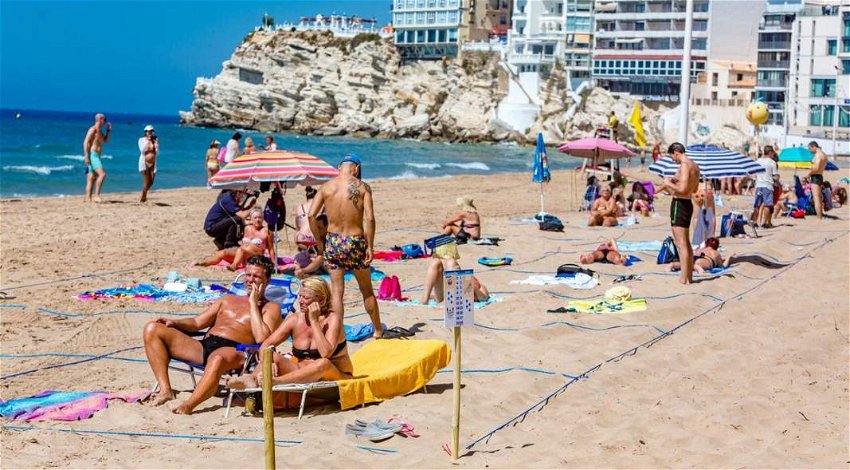 A million sunskeers have enjoyed Benidorm’s ‘safe beaches’ since they reopened on June 15 after lockdown.
THE milestone was reached on Thursday, August 6, according to the company in charge of the beaches management for this summer, RA Benidorm, and the control points of the 33 access points in the Levante, Poniente and Mal Pas beaches.
“The moment Benidorm started to work on the reopening of its beaches, people’s health safety was established as the main priority, opting for a ‘reorganisation and modulation’ that guarantees the required distances between users so that everyone can enjoy the popular coastlines,” said Visit Benidorm.
The measures are all part of the ‘Benidorm Beach Safety’ project which set out to achieve safe beaches for everyone and every day.
Visit Benidorm added: “Thanks to this project, Benidorm beaches offer for the first time their exact capacity that has reached peaks of 35,000 users on weekend dates.
“Sunday, August 2, Benidorm registered a new record of attendees at the beaches, with 35,258 people.”
Levante Beach offers 1,610 plots and Poniente’s reaches 5,561, which together with the 25 free-use plots of Mal Pas Beach reach a figure of 7,196 plots in total, allowing a maximum occupancy of four adults and a child under six-years-old per plot.
“With the data offered and taking Levante beach as a reference, with reservations through the Benidorm Beach Safety platform, from July 17 there have been 106,516 uses, with a daily average of 6,087 users, 62.2 per cent of whom are women and 38 per cent men.”
The average age of the majority of users (51.9 per cent) is 25 and 59. The second largest user group (17.2 per cent) are aged 60 and over, with 15 to 24 year-olds accounting for 14.4 per cent.
Children aged six to 14 represent 10.4 per cent, under six-year-olds (five per cent) and 1.2 per cent “from a group considered high risk”.
The average occupation is 2.4 people per plot and by origin, 94.8 per cent are nationals and 5.2 per cent are international visitors.
The reservation system works through the web platform www.benidormbeachsafety.es, and in the three physical points installed on the beach – in the El Torrejó building and Avenidas Europa and Rincón de Loix.
The reservation process starts daily at 9am, when users can choose an area, plot and time until 9.30pm.
Walking and swimming is allowed between 7am and 8.45pm.
Visit Benidorm explained that the plots which are not occupied before 11am are automatically released so that they can be used by other users.
The same applies to the pitches reserved for the afternoon shift that are not occupied before 5.30pm.
These can be obtained online or in person at the box office starting at 11.15am and 5.45pm respectively.