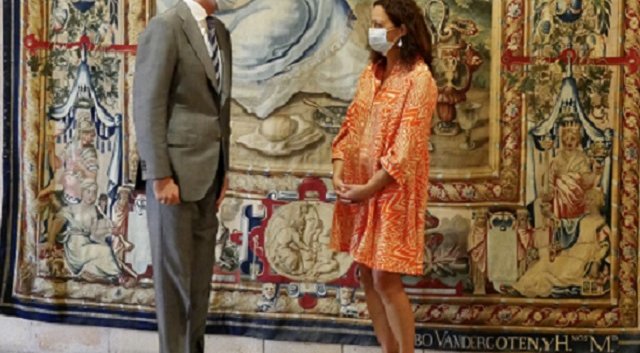 THE Mallorca President has thanked the Spanish king for bolstering the image of the island as a safe holiday destination.

“The best promotion there can be for Mallorca is that the Royal Family maintains its holidays in this Covid situation”, Catalina Cladera said she told King Felipe VI at an audience with the monarch on Monday morning at the La Almudaina Palace in Palma.
Commenting to press following the meeting, Cladera said the presence of King Felipe, Queen Letizia and their daughters Princess Leonor and Infanta Sofia at the Marivent Palace in the Mallorca capital represented a message of “peace of mind and of safety.”
She added, “If the King is in Mallorca it is because you can keep coming here in a safe and calm way.”
The head of the Mallorca government explained her talks with the monarch had centred on the social and economic impact of the pandemic and the fact the crisis has been tougher on the island than elsewhere in Spain due to its dependence on tourism.
The King began his official agenda while in the Balearics with meetings with members of the islands’ authorities, beginning with an audience with regional president Francina Armengol.


She, like Cladera and the President of the Balearic Parliament Vicenç Thomas I Mulet, made it clear conversations with the King had focused on the complicated situation in the archipelago as a result of the health crisis, and had not touched on controversy surrounding his father King Juan Carlos.
Palma Mayor Jose Hila, who had his meeting with the King via videoconference due to having been in contact with someone testing positive for Covid-19, also said the only topic discussed was the fallout from the pandemic.
The Royal Family arrived in Mallorca on Friday night in the midst of the hoo-ha about where the King’s father has gone after he announced he was leaving Spain to protect the image of the country in the face of damaging allegations about financial misdeeds.
The Royal Family are due to remain in the Balearics until August 18.
Unlike previous years when they have spent the whole of their traditional Mallorca summer break on the island, this time they are also visiting Ibiza, Menorca and Formentera.