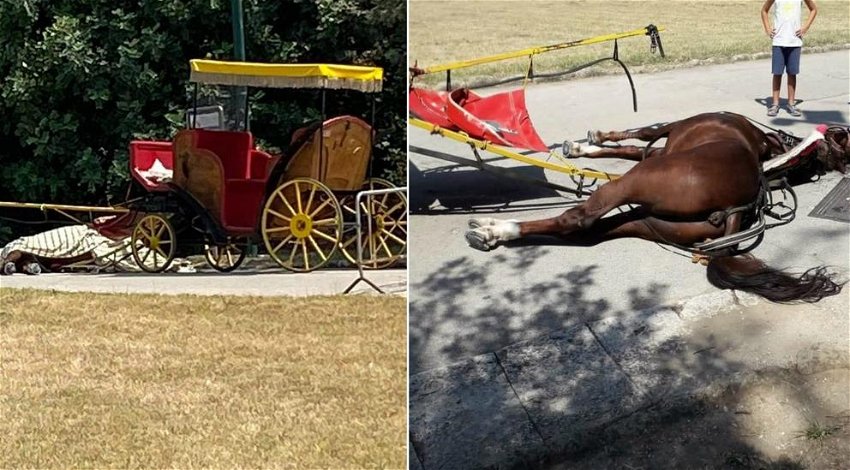 The image of a dead horse lying on the ground near the Royal Palace of Caserta, located in the Italian region of Campania, has gone viral in a few hours thanks to a Facebook post that has been broadcasted by many news sources around the world.

The photo, captured by a tourist, shows how the horse collapses whilst still carrying the carriage with tourists on it. Those present described that the area was ” scorching hot “, although it is still too early to determine the cause of the animal’s death.

A volunteer from the National Animal Protection Authority of Caserta posted the following message on Facebook: “Royal Palace of Caserta, just now … Despite the heat, the horses are still going up and down with a full carriage. Today, one of the horses could not resist any longer and recently collapsed on the ground. It is dead”.

“It will soon be replaced, as the animal is just used as a tour bus,” they lamented. They also made an appeal to tourists: “When making a decision, make sure you cause no suffering, even to animals.” The animal has been taken to a specialized centre where an autopsy will confirm if the death was because of having to carry a carriage at high temperatures.

The National Organization for the Protection of Animals, in Italy, has condemned this practice for years as they have sought to stop equestrian exploitation. “It is absurd that animals are still used for these purposes, even in light of scientific knowledge which proves that animals suffer and that they suffer exactly like us,” said Massimo Pigoni, the National Vice President of ENPA.

Animal lovers on the Costa del Sol have been outraged by the sight of this and demand that measures be taken to aid the horses in Spain who also suffer from this abuse. Horse and carriages on the Costa del Sol are frequently seen, especially in tourist hotspots. Ella Wright, an equestrian lover and protected of animal rights, has argued that “these images should be a wake-up call for animal lovers, we need to campaign for better rights on the Costa del Sol. Not only for the horses but also the donkeys in Mijas who are subjected to abuse all because of tourism”.