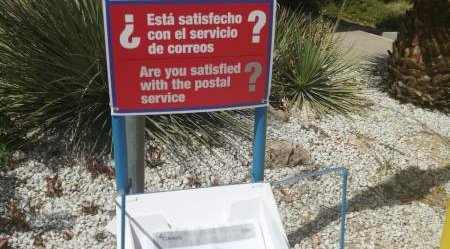 The Post Office in Gran Alacant is coming under fire once again as, to the amazement of residents, the already poor service and facilities have gotten worse since the Covid-19 health crisis began.

GRAN ALACANT may be best known for its beautiful beaches, but its residents know there is always an ugly site waiting to be found.
If you venture far enough up ‘cardiac hill,’ you will eventually come to a small Post Office, normally with a rather large queue waiting outside.
With ongoing issues of short opening hours, staff shortages and the cramped, old facilities, it has left Gran Alacant with a building no longer fit for purpose.
The accessibility is poor, there is inefficient storage with parcels scattered all over the floor, and no waiting area outside, meaning many users have to stand out in the sun, at high temperatures, for waits of as high as 45 minutes.
The Association of Neighbours of Gran Alacant have had enough, and with backing from the council and the mayor, have been in talks with Post Office officials.
Euro Weekly News spoke to some residents of Gran Alacant concerning the ongoing issues, with one woman voicing her displeasure, “I dread going to the post office at the moment because I know I will be standing for a very long time, in the sun, in the heat of the day.”
The council of Gran Alacant are taking the matter seriously, and in direct coordination with the mayor and the Neighbourhood Association, is holding talks with Post Office delegates.
The council are alleged to be willing to help with potential improvements, stating their willingness to help improve the service by all means at their disposal, such as ceding municipal land to build new facilities, transfer of municipal taxes and other incentives.
In February, an official request was made by the mayor, requesting the simplest and most viable immediate solution to improve the service, an extension of the opening hours, with 8.30am – 6.30pm being suggested.
However, that plan has yet to be agreed upon or implemented.


The Association of Neighbours of Gran Alacant have used their own initiative in order to seek the necessary changes, and have recently set up a leaflet stand for anyone who has complaints. This is in the hope that whatever residents have to say about the Postal Service can be taken to Post Office officials quicker and in a more organised fashion.
The council has sent an encouraging message to residents, communicating that they will continue to seek solutions to solve this problem “in the short, medium and long term,” before finally adding, “we will work until the residents have an effective and reasonable service, so that it can be said fairly that it is being provided normally.”
Residents will be hoping for a speedy resolution to this slow and painful postal problem.
For more news from Southern Costa Blanca, please follow this link.