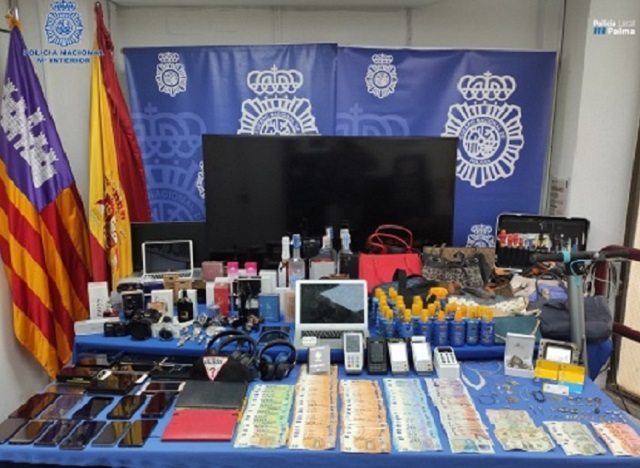 A GANG of pickpockets busted in the Mallorca capital stole some €12.5 million over the last decade or so, National Police reckon.
The investigation into what is considered one of the biggest criminal networks of its kind in Europe saw raids on 20 properties in the city on Tuesday and 34 suspected members arrested, 14 of them women.

Officers seized more than 300 items, like mobiles, sunglasses and perfume.
Police first launched the investigation due an increase in reports of thefts of wallets, backpacks, credit cards and mobile phones in Mallorca’s main tourist zones, including Playa de Palma, the cathedral, the Bellver castle, Palma old town, Alcudia port, Peguera, Port d’Andratx, Soller Port, Valldemossa and Cala Rajada, as well as on bus lines.
The thieves tried not to steal more than €400 worth of items in one robbery and did not use violence or intimidation, police said. At times they also used minors to do the thieving.
Investigators believe the network carried out more than 300 robberies in Mallorca just over the last three months. They also believe they carried out thefts from shops to order of merchandise which was sent to Romania.


The investigation revealed they were dealing with a highly organised and structured international criminal organisation.
The members, all of Romanian origin, acted in a coordinated way to carry out robberies in different European countries. Several were based in Mallorca and reported on the areas on which to focus the criminal activities.
The gang members would meet up every morning in to plan their day, disguising themselves as tourists.
The money they got from the robberies was then sent to family members in Romania; police detected dispatches of in excess of €1.6 million in cash.
A judge had now ordered 20 of the detainees to leave the Balearics and has imprisoned six, three of them with €6,000 bail. The remaining suspects have been released, but have to regularly check in with the authorities.
Police also reported that they have issued European arrest warrants for another 18 individuals outside the island and that the investigation remains open.