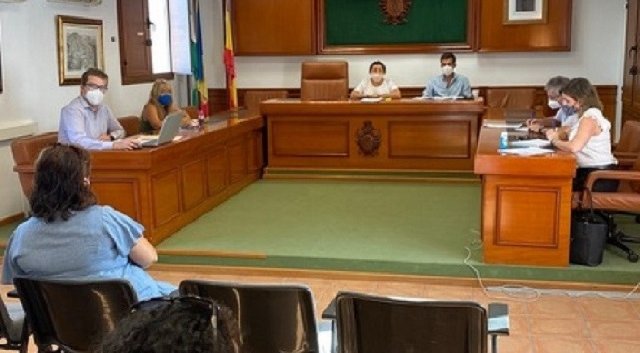 UNANIMOUS: Councillors backed an agreement which sees a plot between Mojacar village and the coast ceded for the construction of a future health centre CREDIT: Ayuntamiento de Mojacar

MOJACAR council has taken the first step towards making a new health centre for the municipality a reality.
Councillors unanimously approved an Urban Development Agreement between the local administration and five Mojacar residents under which an area of land between Mojacar village and the coast will be ceded for the construction of the future facilities.
The council described the Los Gurullos site as an “excellent location” given its central position and accessibility.
At the same extraordinary plenary meeting council members agreed the regulatory bases for the “Mojacar Contigo” financial aid plan for local businesses and the self-employed.
The programme is aimed at easing the negative impact of the Covid-19 health crisis on companies with a usual turnover of less than €1 million a year and on individuals who work for themselves, particularly those who had to close after the national state of alarm came into force.
All residents with a fiscal registration in Mojacar will be eligible to benefit from the assistance, which is divided into two sections.
The first is an amount of up to €500, which can be used to subsidise costs such as the rental on business premises, utility bills and self-employment expenses.
The second section, offering the same maximum amount, is to go towards the purchase of sanitary items such as hydro-alcoholic gels or disinfectants, masks, and gloves as well as protective items like partitions for guaranteeing social distancing.
The council has allotted €220,000 from this year’s budget to the assistance.
The municipal administration explained that due to the exceptional health crisis situation and its negative effect on the local economy, it intended to continue to wherever possible provide all the necessary support to prevent the closure of small businesses and a rise in unemployment in the locality, and a consequent increase in the risk of social exclusion.
All the aid regulations will be published in the Office Provincial Bulletin and will appear on the council noticeboard, on the internet and the National Subsidies Database.
Information on deadlines for applications for the assistance will be available on the Mojacar council website and can be submitted online or by email.
The local authority clarified that the Mojacar Contigo grants will be compatible with any other regional, national, or international subsidies as well as any other offered by Mojacar council.