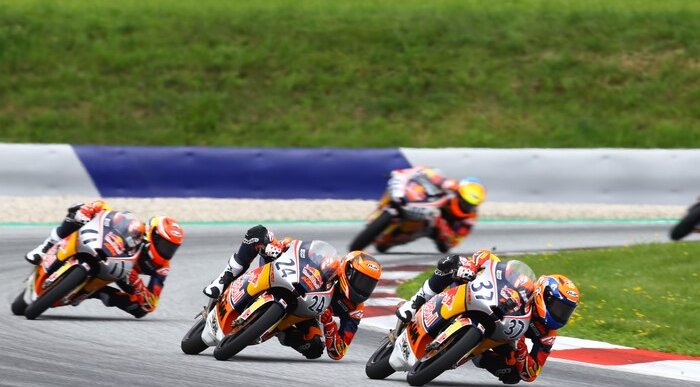 Pedro Acosta wins twice in Austria to give himself an excellent chance of remaining in next seasons competition as he speeds towards the MotoGP World Championships.

THE Red Bull Rookies Cup, the prelude category of the MotoGP World Championship, is set to conclude in November and Pedro Acosta will be hoping to continue his excellent form in order to win the cup.
The youngster didn’t have it is own way though, with the second race proving a lot tighter affair.
Acosta always remained in the top positions and led the race on several occasions, but he could never fully escape his rivals.
Finally, with two curves to go he regained the lead and despite massive pressure from two other Spaniards, David Muñoz and Daniel Holgado, he managed to hang onto first place by 42 thousandths of a second.
After prevailing victorious on the second day, he currently leads the championship with 50 points.
The 16-year-old once again demonstrated his mastery with an almost impeccable ride, leading it for much of the time, Acosta explained to the media that “this second competition in Austria has been incredible, although both races have been very tough. Everything has been very close; a fight continues on the last lap. The level is very high this year, I am proud to do the double in Austria”.
He continued, “I said to myself as I took the lead that I had to make the perfect lap under control. But you know in this level of racing nothing is completely under control. I had to push it to the maximum, push it 100% and I did that.”
“It is a great feeling to do the double here especially as the level of the Cup is so high this year,” he concluded.
Pedro Acosta, David Muñoz, Daniel Holgado and David Alonso, all from Spain, replicated their epic Race 1 finish in Sunday’s Race 2 at the Red Bull Ring, meaning that an all-Spanish podium was repeated with 16-year-old Acosta drawing from his extra season of Red Bull MotoGP Rookies Cup experience to hold onto the narrowest advantage over the 5 newbies finishing behind him.
The Red Bull Rookies Cup season will continue on August, Saturday 22 and Sunday 23, again in Austria. After that, the championship will continue in October 17, 18, 24 and 25, with new races being held in Aragon. The last four races will be held in Valencia on November 7, 8, 14 and 15.

The future looks bright for Mazarronero, Pedro Acosta, who will no doubt be speeding into the MotoGP World Championships very soon.
For more news from Southern Costa Blanca, please follow this link.