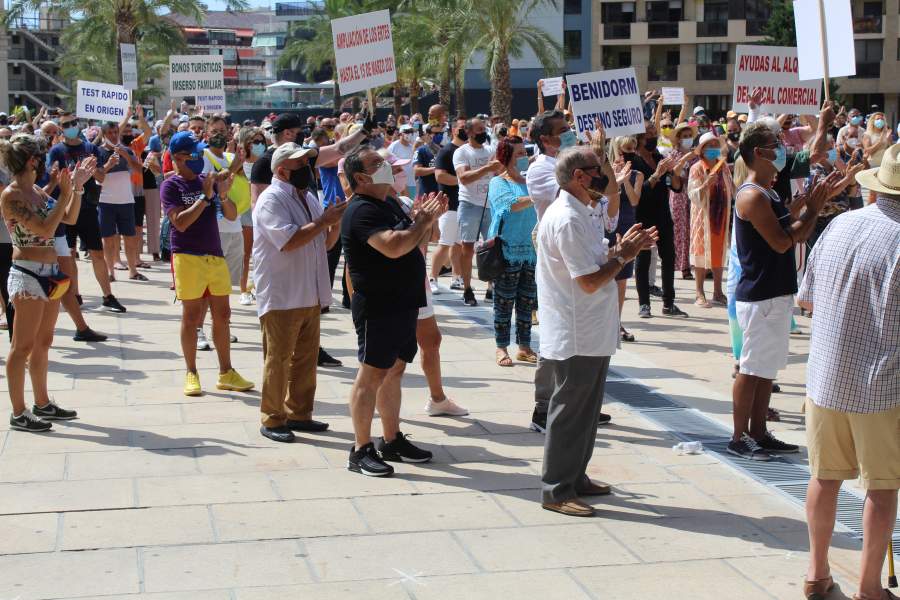 PRAISE: The Mayor commended the social distancing and hygiene and safety at the protest. CREDIT: EWN

BENIDORM’S mayor has praised the “exemplary behaviour” of the 1,000 plus demonstrators who took part in the town’s first protest to demand ‘respect and justice’ for the local tourism sector.
Toni Perez also highlighted the “success of the organisers” behind the peaceful march along Levante promenade to the town hall which attracted more than 1,000 British and Spanish business owners, traders and residents.


The mayor met with representatives of all associations involved in the sector – including Abreca, Cobreca, AICO, Ociobal, Aptur, Avibe, and the Association of Campsites – to learn first hand their claims in relation to the measures that affect their sectors.
The peaceful demonstration, as reported by Euro Weekly News, was prompted by the Spanish government’s “continual absurdities and lack of organisation or planning during the health crisis,” said co-organiser, AICO, Benidorm’s independent shopkeepers’ association.
Government policies are penalising business people, shopkeepers and the self-employed and burdening them with debts, the association added.
Together with ABRECA, representing Benidorm’s bars, restaurants and cafeterias, and OCIOBAL, an association of disco, pub and night-time venue owners, AICO called on the local population to join the demonstration.
And while it was initially believed around five hundred people had turned out, organisers have since confirmed more than 1,000 people marched along Levante promenade to the town hall on Sunday morning.

Among measures they are demanding to help relaunch the tourism sector is a reduction in IVA (VAT), and an extension of ERTE for tourism and commerce workers until March 2021.
The three associations behind the protest have argued that holiday destinations with favourable statistics should not be subjected to the most recent stricter government measures.
They intend to start legal proceedings calling for the suspension of the latest decree, which has enforced the closure of discos and similar venues and the prohibition of smoking in the street and on terraces where a safety distance of two metres cannot be maintained, AICO explained.