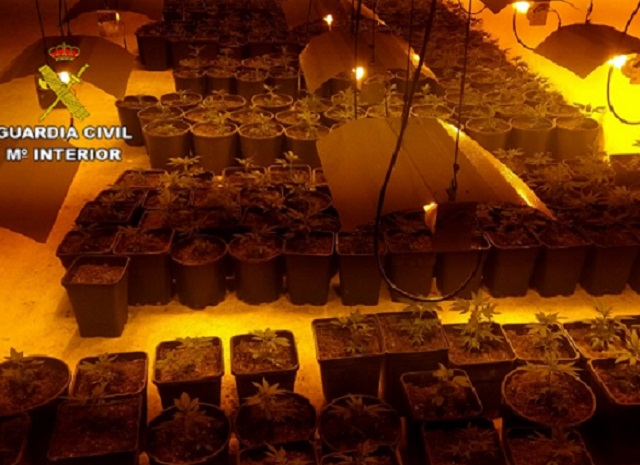 GUARDIA Civil have smashed an international cannabis trafficking ring operating in three Andalucia provinces.
Operation “Rodillo” involved officers in Almeria, Malaga and Granada and resulted in 13 arrests on charges of membership of a criminal organisation, breaking and entering, illegal ownership of arms and defrauding the power supply, as well as drug trafficking.
The investigation into the gang began in February on the Costa Almeria when Guardia Civil officers in Los Gallardos intercepted a rented vehicle driven by someone dressed like a painter and decorator. Sure enough there were painting materials in the vehicle, but hidden among them were 27 kilos of cannabis buds vacuum packed in 54 packages.
Investigations revealed the drug originated from Granada and there was a whole, interlinked criminal network dedicated to the international trafficking of the drug, which between September 2019 and February this year alone carried out more than 40 cannabis deliveries.
It also emerged the organisation had a faction in Malaga which was responsible for supplying the cannabis through exporter contacts based in Almeria, who in turn stored the drug coming from small suppliers and intermediaries in Granada.
The operation involved nine searches and the seizure of close to 40 kilos of cannabis, precision scales and materials for packing the drug, three firearms, ammunition and more than €100,000.
Parallel to the anti-drugs operation the Guardia Civil also uncovered a clandestine cockfighting pit in Granada.

Share your story with us by emailing ne[email protected], by calling +34 951 38 61 61 or by messaging our Facebook page www.facebook.com/EuroWeeklyNews