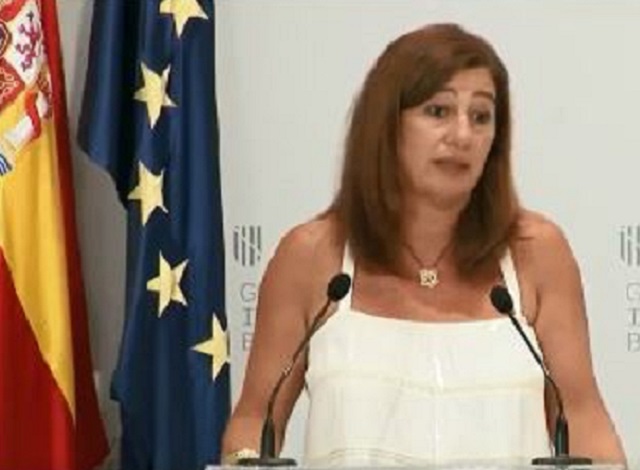 CURRENT SITUATION: The progression of the virus on the islands is “worrying”, according to the Balearic President CREDIT: Govern Illes Balears Twitter @goib

THE Balearic government has announced tighter restrictions aimed at containing a surge in Covid-19 on the holiday islands.
Beaches and municipal parks are to be closed from 10pm at night, smoking on the street and social gatherings of more than 10 people are banned, and bar and restaurant maximum capacity is reduced to 50 per cent.
The new measures set to come into force this Friday August 28 following publication in the BOIB Balearic Island Official Bulletin also include making it compulsory to wear a face mask in most workplaces and on seafront promenades, and prohibit eating or drinking at cultural or sports events or on public transport.
All brothels must close.
The archipelago’s administration will also look at selective lockdowns in areas of Palma and other parts of Mallorca to deal with outbreaks.
Wednesday’s announcement on the decision to implement greater controls comes just two days after the spokesman for the regional committee for the management of infectious diseases admitted the Balearics are experiencing what could be described as a “second wave” of Covid-19 infections.
Speaking at a press conference earlier today the Regional President Francina Armengol warned the “progression of the illness is high and worrying.”
The situation is not as bad as in March, she added, but made it clear she believed there was an issue in terms of getting the message across to some sections of society that the virus has not gone away and the risk of infection remains.
She particularly pointed to get-togethers of family and friends, and emphasized a need “to be responsible, now more than ever.”
On Tuesday the regional government added another 908 people to the total testing positive for the virus on the islands, a figure which the Health department clarified included cases not previously reported over the last week and not just an increase over 24 hours.