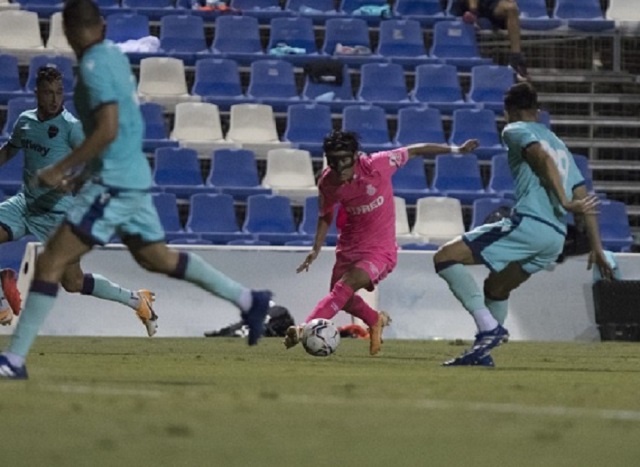 NOT AT BEST: The break from competitive football was obvious in a side still in the early steps of getting back to full match fitness CREDIT: Real Club Deportivo Mallorca News

MALLORCA’S opening friendly fixture of the pre-season ended in a 2-1 defeat at the hands of Levante UD as new manager Luis García Plaza saw his side in action for the first time.
The boss gave a hint as to the style of football Real Club Deportivo Mallorca supporters can look forward to, opting for a four-man defence in Antonio Raillo, Martin Valjent, Rafa Obrador and Joan Sastre, with Aleksandar Sedlar sitting in front.
Elsewhere, teenager Luka Romero was handed minutes in central midfield, while the returning Alex Alegria was the lone forward in attack.
The break from competitive football was obvious in a side still in the early steps of getting back to full match fitness as Jorge Frutos gave Levante UD the lead after just two minutes when he poked home from close range.
Gonzalo Morelo doubled their lead 20 minutes later when he received a pull-back on the edge of the box and found the corner to the frustration of Manolo Reina.
The Mallorca side started to find their feet shortly after as Dani Rodríguez tried a cheeky chip from distance having seen Aitor Fernandez off his line, although the goalkeeper managed to recover to save.
There was nothing he could do about Salva Sevilla’s thumping effort from outside the box on the 34th minute however, as the midfielder fired into the top corner to pull one back just before half-time.
Los Granitos started stronger following the restart and almost made Mallorca pay for it when Hernani fired over the bar from closer range after he connected with Dani Gomez’s cross.
García continued to make changes in the second half, introducing academy trio Ivan Bravo, Carlos Quintana and Alberto Redondo with just under 30 minutes remaining, having already brought on a host of senior stars, including Aleix Febas, Iddrisu Baba and Aleksandar Trajkovski.
Chances remained few and far between for both sides as Mallorca lacked the killer pass in the final third, although that didn’t stop substitute Yannis Salibur producing a solo effort which just went wide of the mark.
The scoreline would remain the same come the final whistle despite Mallorca’s best efforts as the squad got an important 90 minutes under their belts ahead of a second friendly fixture in 48 hour.
RCD Mallorca: Manolo Reina (45’), Joan Sastre (62’), Raíllo (62’), Valjent, Obrador (45’), Sedlar (45’), Salva Sevilla (45’), Dani Rodríguez (58’), Lago Junior (62’), Luka (58’), Álex Alegría (45’)
Substitutes: Román, Parera (45’), Quintana (62’), Russo, Febas (45’), Prats (45’), Salibur (58’), Baba (45’), Gámez, Trajkovski (58’), Antonio Sánchez, Víctor (45’), Redondo (62’), Bravo (62’), Budimir, Stoichkov
Levante UD: Aitor Fernández (45’), Toño García (45’), Duarte (45’), Sergio León (45’), Roger (45’), Bardhi (45’), Vukcevic (45’), De Frutos (45’), Miramón (45’), Melero (32’), Coke (45’)
Substitutes: Koke Vegas (45’), Son (45’), Rober Pier (45’), Radoja (45’), Hernani (45’), Morales (45’), Clerc (45’), Campaña (45’), Pepelu (32’), Dani Gómez (45’), Fran (45’)
Goals: De Frutos, 1-0 (3’); Melero, 2-0 (22’); Salva Sevilla, 2-1 (34’)