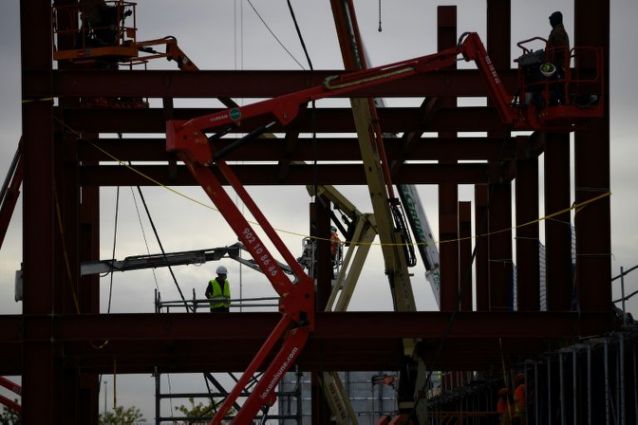 A new hospital is being hurriedly built near Madrid airport as the city braces for a second wave of the coronavirus.

AN army of cranes fills the skyline while workers toil round the clock to build the new special pandemic hospital which is expected to be finished by November. Whether we choose to admit it or not the second wave of the Covid-19 outbreak is already underway in Spain, and it is straining the capital’s public health care system to the core.

It is understood that around 400 builders have been working round the clock since July to build the 45,000-square-metre (484,000-square-foot) 1,000 bed Isabel Zendal hospital. The facility will be the first in Spain to be purpose-built for the crisis which will be similar in operation to the NHS Nightingale hospitals in the UK.

NHS nightingale hospitals in the UK are prepared and set up for an expected second wave of the virus. image: Wikipedia

The deafening sound of multiple concrete mixers can be heard at the vast building site, sparks fly into the air as welders grind away at the pillars that will form the backbone of the building. “Two months ago there was nothing here,” said Alejo Mirando, the director-general of health infrastructure in hardest-hit Madrid region.

The regional government of Madrid is spending an estimated €50 million to build the hospital, which will have bay windows and will allow doctors to monitor patients without becoming contaminated and will also include large halls without individual rooms.

The architecture was designed to “avoid transmission” of viruses. The inspiration came from the design of a temporary field hospital which was set up at Madrid’s sprawling Ifema exhibition centre between March and May, said Mirando.

It is feared that the opening of the new hospital, however, will come too late to deal with a surge in infections in the Madrid region, which Prime Minister Pedro Sanchez has called “worrying.”

Madrid accounts for almost a third, 73, of the 191 Covid-19 deaths recorded in Spain in the last week, and for nearly a third of the country’s total toll of 29,000 deaths. The rapid surge in infections is “similar to that at the beginning of the pandemic,” said Silvia Duran, a spokeswoman for doctors’ union Amyts.

Among the demands of health care workers is greater use of telemedicine – “It is us who are going to get sick,” said Duran of doctors’ union Amyts. The doctor recounted that in April this year healthcare workers accounted for around 20 per cent of all Covid-19 cases in Spain, the highest proportion in the world, according to the European Centre for Disease Prevention and Control.

At the beginning of the pandemic, China amazed the world by building a 1,000-bed hospital in just 48 hours.