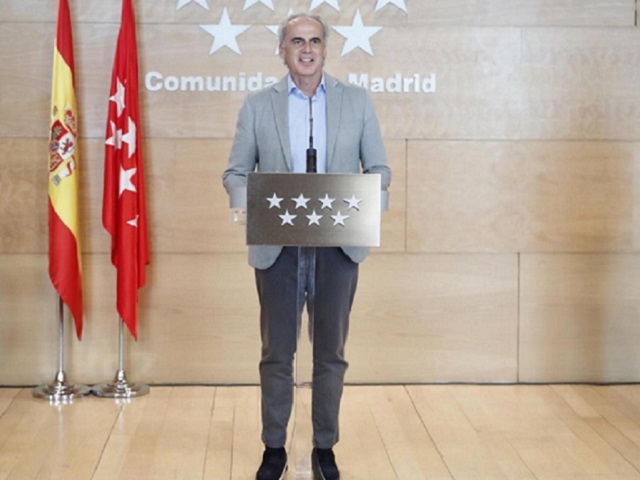 TIMING: The end of the holiday period means more movement and greater use of public transport, The regional Health minister pointed out

TIGHTER restrictions will come into force in Madrid on Monday in a bid to halt the surge in the number of new Covid-19 cases in the Spanish capital.

Regional Health minister Enrique Ruiz Escudero announced a series of measures on Friday as part of the administration’s ‘Return Plan,’ which coincides with the end of the summer holiday period.

“It is a moment marked by an increase in cases, the return to school, the universities and to work, and which means more movement and greater use of public transport,” Ruiz Escudero pointed out.

From the beginning of next week gatherings of more than 10 people are not allowed, whether in a public or private location.

A top number of 10 also applies to guided tours and group visits to museums, exhibitions and monuments.

The maximum capacity allowed at funeral parlours drops from 75 to 60 per cent, and no more than 50 people will be able to go to open-air funerals or cremations, or 25 in enclosed areas. The same applies to religious ceremonies like masses, weddings, christenings and communions.

Where celebrations are concerned, the maximum again goes down to 60 per cent of the venue capacity. Dancing and free bars are out, and guest are supposed to remained seated while eating and drinking.

There is also a reduction in the capacity limit for multi-use centres, from 50 to 40 per cent.

For venues like casinos and racetracks, as well as zoos, aquariums and attraction parks, it again it goes down from 75 to 60 per cent.

Further changes include upping the space between chairs on bar and restaurant terraces and restricting capacity at restaurants’ bars to 50 per cent.

The public are now banned from going to watch bullfights.

The Community of Madrid government is meanwhile increasing the number of Covid-19 contract tracers from 560 to 1,000, in addition to which the region will have 150 Ministry of Defence tracers.

At the same time it is allocating €3.5 million to a campaign to raise awareness among the public about preventing possible Covid-19 infections, which will run until Christmas.

Ruiz Escudero said the restrictions will be revised every 15 days and will be in accordance with Public Health General Management criteria.

Earlier on Friday the Madrid regional president Isabel Diaz Ayuso described the decision to introduce stricter restrictions in an interview with national Spanish television as “really tough.” She ruled out a lockdown at this time.