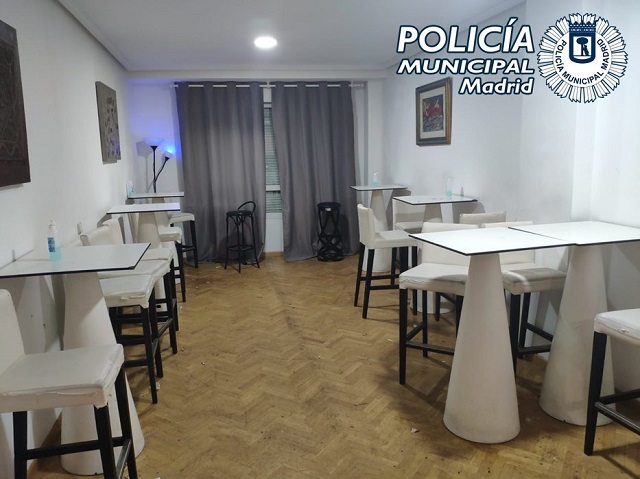 MEASURES to prevent Covid-19 infections were nowhere in sight at a clandestine brothel police discovered in the Spanish capital.

None of the 75 clients and sex workers were wearing face masks, social distancing or complying with any of the compulsory health and safety measures, Madrid Municipal Police reported on Twitter.

It was a member of the public who inadvertently tipped off a couple of plain-clothes officers out on patrol in the city in the early hours of Saturday morning that two third-storey apartments in the Tetuan neighbourhood were operating as a bar and as a house of ill repute.

The location is right next door to a hostess bar which was closed at that hour of the night under current regulations aimed at stemming the spread of Covid-19.

According to reports the man who unknowingly was alerting police to the goings on in the two flats told them he was in charge of spreading the word about the set-up, as well as responsible for keeping an eye out for police.

He assured them they would find “alcohol, girls and parties” upstairs. And he wasn’t wrong.

The officers found one of the apartments furnished with tables, stools and bars all quite close together.

There were lists of drinks, the typical price charged €20.

The apartment next door had rooms which is where allegedly the prostitution went on.

There were some 30 women there in all.

Police have issued reports against all 75 people who were inside the two apartments for violating health and safety regulations.

They have also issued reports against the apartment owners for violating the law on public event and recreational activities on the grounds the two properties were being used as a special bar with music with any kind of licence and were breaking rules like limitations on maximum capacity.

It was also reported that police are looking into charging those responsible for a serious crime against public health.