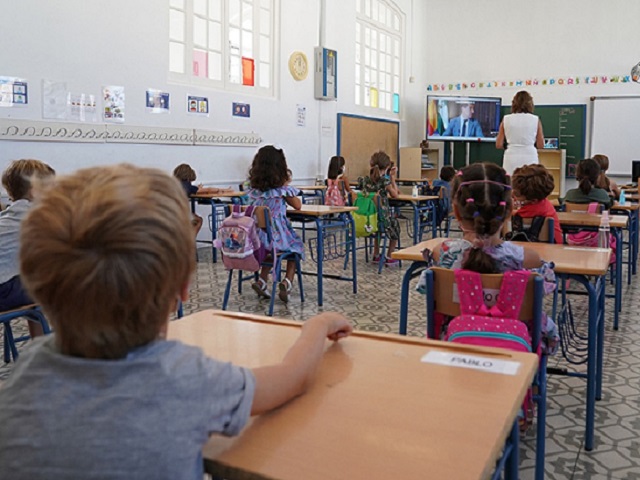 PRAISE: The Andalucia president thanked the education community for all their efforts to make face-to-face teaching a reality once again. CREDIT: Junta de Andalucia Noticias

THE new term in Andalucia got off to a start on Thursday with just seven of the more than 2,500 schools which had been expected to open their doors remaining shut.
Three schools in Malaga and two in Granada have delayed reopening after some of their teachers tested positive for Covid-19.
A lack of pupils to teach was the reason a school in Guarroman in Jaen and another in Bolonia in Cadiz did not open, the parents preferring to keep their offspring away for the moment.
Andalucia government president Juanma Moreno’s assessment at the end of the first day of school in the new Covid-19 reality was that it had begun with “normality”, with some 60,600 teachers and 800,000 children back in the classrooms and hardly any incidents.
In terms of the number of children, he explained that the regional Education and Sport department would be doing a count after four days.
Moreno made a point of praising the education community for all their efforts and dedication in making the return of face-to-face teaching a reality once again, some six months after the pandemic forced schools to close.
“The work you have done and which you continue to do is beyond price”, he commented.
He also maintained the Junta de Andalucia has made “an unprecedented effort” to ensure the new term started with the maximum safety guarantees.
He highlighted the 6,500 extra teachers and extra cleaning and disinfections. Also the three million face masks and 230,000 litres of hydro-alcoholic gel for the classrooms, as well as the testing of teachers and school staff for Covid-19.
At the same time, €25 million has been invested in adapting and enlarging schools and €45 million has gone on the acquisition of laptops: the Junta has bought 150,000 and a further 180,000 have been acquired with the assistance of the national government.
Moreno made it clear that the Andalucia administration is continuously monitoring the situation in all the region’s education centres.
“We will act immediately when and where necessary”, he stressed.
Next Monday September 15 it will be the turn of Andalucia’s secondary school age children to start classes once more.