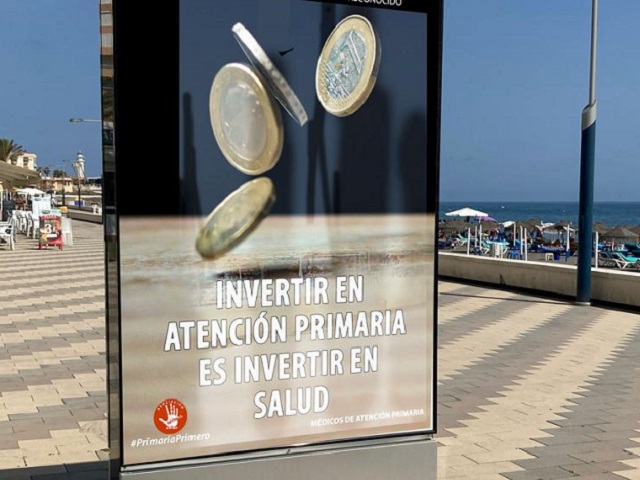 CLAIMS: The Basta Ya Malaga platform insists the regional government must act now to address what it says are problems of underfunding and “intolerable pressure” due to the pandemic CREDIT: Bastayamalago Twitter @Bastayamalaga2

MALAGA’S primary care doctors are threatening protest action if the Andalucia regional government fails to act on their calls for ‘urgent change’ in medical centres.
Doctors who have come together as the ‘Basta Ya Malaga’ platform issued a statement at the beginning of this week warning that the primary health care sector is ‘burning.’
They believe “the time has come to “evaluate the involvement and commitment of the current government in the urgent changes which the Andalucia health service needs, and specifically primary attention,” and which they claim were “promised repeatedly in the electoral campaign and manifesto.”
To begin with the platform insists there are not enough doctors. Staff shortages were a problem even before the Covid-19 health crisis, the doctors say, maintaining that even with the arrival of the pandemic there has been a lack of Junta effort and investment in regard to the matter.
The platform also complains about what it describes as the “miserable” amount of time doctors have to see each patient, a situation they point which has been transferred to consultations by telephone.
A further complaint laid out in the Basta Ya statement is what they sustain is “a lack of planning when it came to taking on Covid-19 contact tracers and the decision to load this responsibility on to health centre professionals.
The result the platform says is that staff are overloaded, “when we have still not recovered from the terrible circumstances we went through during the first wave of the pandemic.”
The statement goes on criticise the primary care appointments system, calling it “irrational” and saying it doesn’t work.
Rather it prevents doctors from “prioritising and properly organising” their work, they say, which especially now is “essential.”
As a consequence there have been “intolerable delays” in patients getting to see doctors, the statement claims. The platform insists that in a good number of medical centres’ consultations are carried out without sufficient time and in conditions of “endless stress.”
According to Basta Ya Malaga the Junta de Andalucia has “abandoned” medical centre professionals “to their luck”, and therefore the population they care for.
What the platform wants to see is change to “a health care system which is insufficiently funded and subjected to intolerable pressure due to the pandemic and by bad management, mainly by the Health Assistance Directorate General.”
And they want to see it right away.
“It is essential to do it now; there is no more time,” they stress.
Unless the administration led by Juanma Moreno responds to their demands they will pick up on the protests “at the same point we left them with the previous government,” the platform warns.
“The Basta Ya doctors are not going to remain silent,” they promise.
We hope you enjoyed this article “Malaga doctors threaten protest action if calls for “urgent change” ignored”.
Euro Weekly News is delighted to continue be able to bring you a range of News that doesn’t cost you anything but your internet connection. Whether it’s Local Spanish News or International Entertainment News, we’ve got you covered!
For more Local Spanish News from the Costa del Sol, head over the page on the Euro Weekly News website.
Euro Weekly News, the people’s paper, we lead others follow!