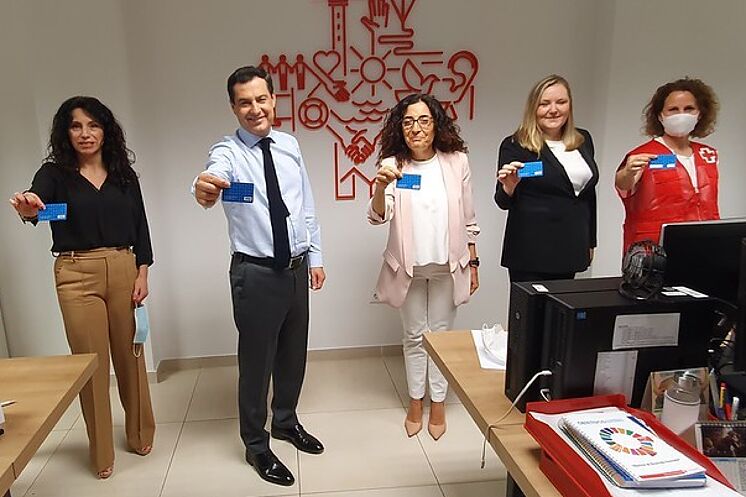 VULNERABLE Benalmadena residents will have been happy to receive a rechargeable lifeline in the shape of the of reloadable ‘wallet’ cards which have been handed out as part of a massive initiative by the Andalucian Government launched as a result of the Covid-19 pandemic and aimed at those most in need in the community.

The Minister of Equality, Social Policies and Conciliation, Rocío Ruiz, has reported that 23,696 wallet cards have already been delivered from the extraordinary programme launched by her department with 175 going to the Benalmadena residents.

“Three months ago we launched this initiative with a budget of €17 million and then we pointed out that we wanted to reach between 20,000 and 26,000 Andalucian families. So this initiative has been and is being a success and of those €17 million, 74 per cent of the budget has already been committed,” she pointed out.

Ruiz, who has visited the provincial office of the Spanish Red Cross in Malaga to meet with those responsible, including the provincial president, Luis Utrilla, has thanked “the organisation’s willingness from the beginning and its commitment to this project that is why they did not hesitate for a second to join. This has allowed us to launch the programme in record time, in coordination with the community social services.

“We knew that the social consequences of the pandemic and the State of Alarm could be devastating in Andalucia, taking into account the situation of structural poverty that we suffer. For this reason, we set to work to redefine our budget and offer a solution that had to be fast, agile and efficient, because the people who are experiencing the worst cannot wait or suffer the slowness of the bureaucracy,” she pointed out with regard to the rechargeable lifeline.

This programme is based on a rechargeable card system to buy basic food, hygiene and cleaning products in supermarkets and shops. The recharges are budgeted between €150 and €250 depending on the size of the family, but also taking into account single-parent families and single-person households. “This is a measure that does not stigmatise the population and that gives dignity to people since many of them have not been users of social services nor had they experienced this situation before,” said the councillor.

On the other hand, Rocío Ruiz has learned, in detail, the projects and activities carried out by the Red Cross in the province of Malaga and, in detail, the strategic projects linked to the Ministry of Equality, Social Policies and Conciliation.

Of the total number of wallet cards issued in Andalucia, 4,350 have corresponded to the province of Malaga. Of these, 2,900 cases have been referred by social services.

Next, the councillor made a visit to the Benalmadena Town Hall which was the first to sign the agreement to participate in the Andalucian Registry of Benefits (RAP) for the Monedero Card. In the consistory, it has been received by the mayor, Víctor Navas, whom she thanked for “his good disposition” and for “being an example of the collaboration and loyalty that must exist between administrations and that is, at this time, more necessary.”

We hope you enjoyed this article “Andalucia’s vulnerable to receive rechargeable lifeline”.

You may also wish to read “Charge cards for struggling families.”