Yesterday is history, tomorrow is a mystery but today is a gift 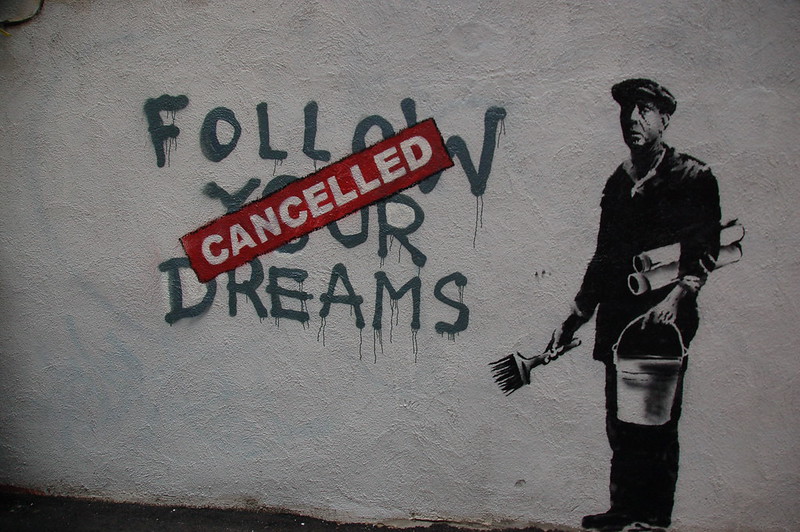 A Banksy view but is it true on the Costa del Sol? Credit: Chris Devers flickr

NOW that Autumn is upon us, it is perhaps a good time to take stock of how we have all been affected by the lockdown and its aftermath particularly on the Costa del Sol which relies so heavily on tourism.

It has all been quite traumatic for different people, for different reasons and in different areas so there is no one easy answer which fits every municipality but for the majority, no matter what the changes, life goes on and people adapt.

When you consider the fact people in Syria and Yemen for example have had to live through years of civil unrest with bombings, arrests and never knowing when the next meal will be available, it goes to show that no matter how badly we feel, others are able to exist in even worse conditions.

When the lockdown first arrived, there seemed to be a genuine feeling of camaraderie with people doing all that they could to help each other and the daily applause for health workers was a real sign of this wish to be part of a caring community.

Families had the chance to get closer as children were not at school and many parents were able to work from home which gave them a chance to bond with and enjoy their families but it was without doubt a stressful time for everyone.

Then slowly but surely the restrictions began to be lifted and we all emerged from our cocoons wondering what the future held for us and it can be seen that for some it was a good experience but for others a complete nightmare.

Charities and those who just wanted to help others undertook some exceptional work to help feed and support those who had lost their jobs or were simply unable to cope with the ‘new normal’ and some Councils also became involved in helping the poorer members of society.

Hotels for the main part remained closed as the lack of visitors from abroad and the cost of meeting hygiene requirements made it uneconomic to open, although some did as there were a number of Spanish ‘staycationers’ taking their holidays on the coast.

A lot of money was spent on opening beaches and making sure that they were not overcrowded with drones and specially recruited staff patrolling and checking social distancing but even that now is about to finish with the onset of Autumn.

Restaurants and some bars opened but rules were both stringent and changing on a regular basis so sadly, a number have given up the ghost and have closed, probably for ever whilst others have battled on with some being highly successful.

One group that has really suffered is that of musicians and entertainers who have found it almost impossible to get regular work and there has definitely been a lack of interest by councils in providing entertainment for non-Spanish residents.

The spirit of comradeship has to some extent become a thing of the past, particularly on social media where keyboard warriors who don’t have the guts to disagree with someone to their face become vicious and nasty trolls happy to insult those, they disagree with even though it is known that cyberbullying causes mental distress.

The Spanish Government has tried to manage the entire problem of the pandemic but it has had some success and some notable failures and certainly it seems to have not only had a number of changes of mind, but also has looked to devolve some decision making to the regions, perhaps to try to reduce blame.

A perfect example has been the return to school which has been patchy and quickly saw some affected by new outbreaks of Covid-19 and others hurt by a decision by some teachers to go on strike and to the very young, this must have been a very confusing time which is still by no means settled.

Some areas are really hurting whilst others see busy restaurants, plenty of people in shops generally continuing to live their lives as normally as possible, even though they have to wear masks.

Other towns however have seen an increase in thefts, particularly of cars and valuables as well as a certain amount of street disturbances between different groups of young people who also seem most likely to flout the regulations.

There is a long way to go until things really settle down but hopefully if you have come through this relatively unscathed and healthy then that has to be considered a bright spot in what has been a dark year, so seize the day!