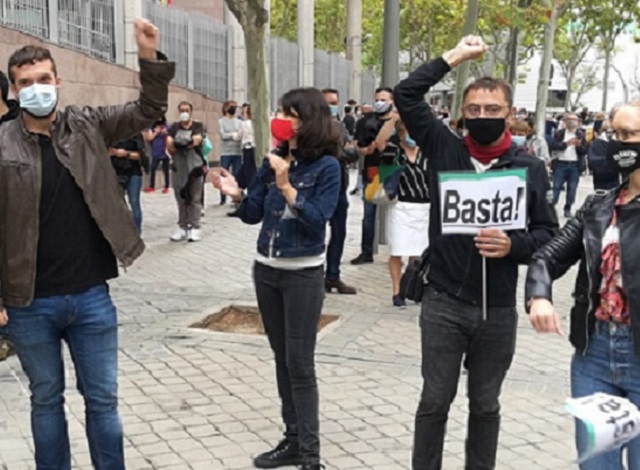 MADRID residents have taken to the streets to protest against new restrictions which will come into force in 37 districts of the Spanish capital from midnight to curb a surge in Covid-19 cases.

Thousands of all ages turned out for the Sunday morning “dignity for the south” demonstrations in response to calls neighbourhood associations put out on social media.

Organisations urged members of the public to voice their opposition to what they claim are “ineffective and discriminatory” measures, and to call for more investment in their parts of the city.

The FRAVM Madrid Residents Associations Federation said the protests were “the result of the upset created in the poorest neighbourhoods, not only by the regional government’s disastrous management of the Covid-19 pandemic, but also by decades of institutional abandonment.”

Some of the biggest gatherings were at 12 midday in Villaverde, Vallecas and Carabanchel.

There were also protests in Getafe, Parla and Fuenlabrada, and further demonstrations are planned for other neighbourhoods this evening.

The demonstrators demanded the employment of more health sector staff and tracers, and the resignation of Madrid regional government President Isabel Diaz Ayuso.

Joining them were leading members of the leftish Podemos party and of Mas Madrid.

The organisers had promised the protest action would be “peaceful” and asked everyone taking part to “respect health safety measures and social distancing.”

Sunday’s action follows Friday’s protests at the Puerta del Sol in the city centre over the decision on new restrictions.

Diaz Ayuso announced on Friday that the new restrictions would be implemented in the 37 districts due to Covid-19 infection rates having reached 1,000 per 100,000 inhabitants over the previous 14 days.

The measures include not allowing movement in and out of health districts without a justified reason, like going to work, school or a medical appointment or for urgent administrative matters

There will be a limit of gatherings of people of a maximum of six, reduced public venue capacity to 50 per cent and shops and establishments will have to close by 10pm. Parks and gardens are closed to the public.

We hope you enjoyed this article “Madrid residents take to the streets to protest against new restrictions”.