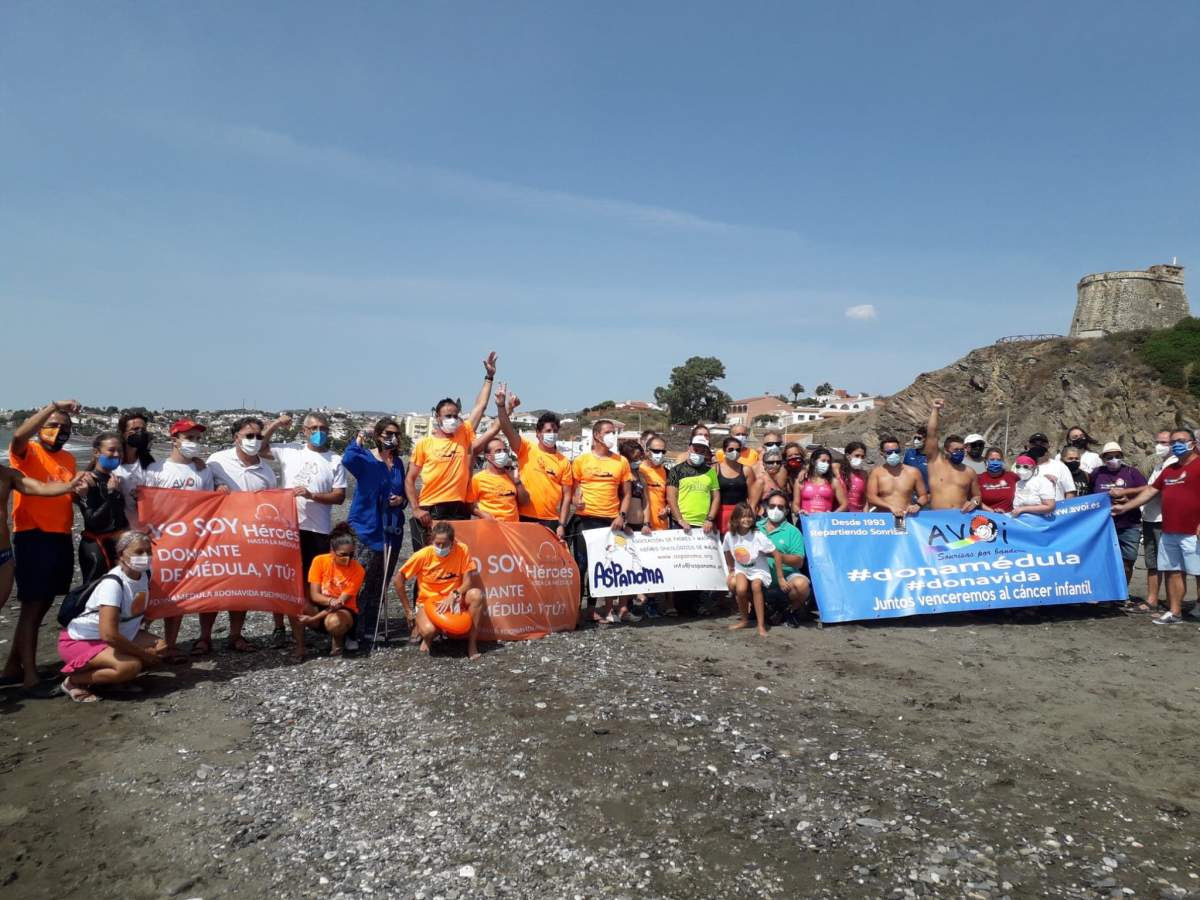 The swimmers and their families. Credit: Héroes Hasta La Médula

EWN has been following the solidarity challenge #MédulaSwimming, Maro to Fuengirola by ‘Héroes Hasta La Médula’ and the third stage was held last Sunday, September 20.
The event was held one day after  ‘World Bone Marrow Donor Day’ and was a huge success despite the adverse weather conditions.
Four swimmers started at 8:30am from Caleta de Vélez to the beaches of Benajarafe to travel 12km. The starting pace was frenetic as the weather conditions in the Torre del Mar were manageable, however, that lasted only a couple of kilometres as the wind and waves picked up preventing the advance of the first group. Nine more swimmers joined in to cover a further 8km, followed by another 16 swimmers to swim 6km and 4 swimmers in the Playa de Valle de Niza to cover the last 2.5km. A total of 33 swimmers from Málaga, Granada and Jaén faced increasingly adverse conditions as the hours progressed.
Dionisio Torre, the originator of the swimming challenge told EWN, “After passing the Punta de Vélez Málaga, the conditions were very different. We found a gusty west wind that pushed the waves against our direction and prevented us from advancing normally, the weather got worse as the hours progressed.”
He went on to say, “Little by little, we regrouped and encouraged each other to overcome the challenge. As of kilometre nine our energies were very depleted and the advance was slow and very costly. After a lot of patience and perseverance, we managed to see the Torre Moya which indicated that the end was very close.”
As the swimmers reached the finish line they were greeted by members of the Héroes Hasta La Médula association, relatives, Doña Mercedes García Paine the Delegate of Education, Sports and Family of Malaga, representatives of AVOI and ASPANOMA, Paula and the Fábrica de Médula de Estepona, swimmer Christian Jongenee and a “super supply of Iznate mangoes” offered by all the company TropiCo Spain.
“We would like to thank all of them for their warm reception, an example of the importance of this initiative. I think it was a BIG day. We faced a constant headwind that was wearing us down, but we come with the satisfaction of making the ‘Héroes Hasta La Médula’ project bigger and bigger,” said Dionisio.
The next stage of the challenge will be held next Sunday, September 27, from Benajarafe Beach at 8.30am with the hopes of arriving at Playa de la Araña by 12.45pm. Swimmers will cross the Playa del Rincón de la Victoria and Playa de Butibamba in another 12km long journey for a unique cause.
For more information about saving lives by donating marrow, blood or spreading awareness go to the following link: donaciones.ugrmecenazgo.es/
We hope you enjoyed this article “Swimmers face daring challenge to spread awareness for ‘Héroes Hasta La Médula’ campaign”.
To read the original article from the beginning of the challenge click here.
Euro Weekly News is delighted to continue to be able to bring you a range of News that doesn’t cost you anything but your internet connection. Whether it’s Local Spanish News or International Entertainment News, we’ve got you covered!
For more Local Spanish News from Axarquia, head over the page on the Euro Weekly News website.
Euro Weekly News, the people’s paper, we lead others follow!