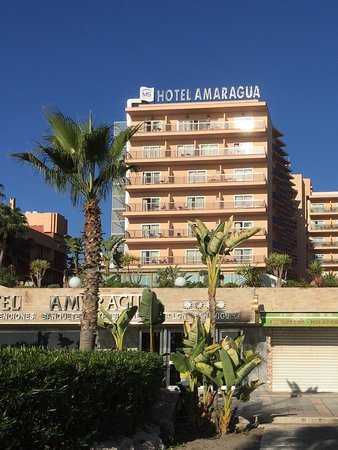 CLOSED. Hotel Amaragua is one of many Costa del Sol hotels which have closed. CREDIT: Facebook

FOR the first time in its 25-year history, the popular Hotel Amaragua resort on the Costa del Sol is eerily quiet and devoid of guests.

One of the largest hotels in Torremolinos, the resort’s facilities are normally packed, but the pool waters lie still, the restaurant is bereft of diners and sheets protect furniture from dust.

Sadly, 80 per cent of hotels on the Costa del Sol are in the same predicament, having had to close with little idea of when they will reopen.

The Amaragua is owned by the MS hotel chain. Founder, Miguel Sánchez, said the situation is “horrific”.

The hotel had just over 600 guests booked in this time last year, reports El Pais, but for the first time in a quarter of a century, there are none, and the Amaragua has become a ‘ghost hotel’.

For the last decade, the hotel sector has improved year on year.

Following previous trends, 2020 was expected to be a hugely successful year, but for the first time in 10 years, the reality has been in stark contrast.

After a crippling three months in lockdown due to the coronavirus, some hotels reopened hoping to salvage at least part of the season.

The average occupancy rates for those that did open their doors were around 35 per cent in July and 40 per cent in August.

The majority of these have now taken the difficult decision to close their doors for the foreseeable future.

Álvaro Reyes, commercial director of the Alay, a flagship hotel in Benalmadena, told the same publication that “this summer has been disastrous, horrible, enough to make you cry”.

Referring to deserted beaches and promenades and bars with their shutters down, Reyes added, “it doesn’t look this empty in winter”.

Hotels such as Pez Espada and the Melia Costa del Sol, who would normally stay open all year round, have also shut their doors in anticipation of a more fruitful 2021.

Quarantine restrictions, issued by the British, Dutch, Belgians and Germans, advising against travel to Spain, has had a devastating impact on the tourism industry.

The ripple affect is being felt by shops, beach bars, car rentals, ice cream parlours, local attractions, and many other small businesses who have also found themselves at crisis point.

There is no denying the Costa del Sol is heavily reliant on international tourism, and it has never been more evident.

On the flip side, national tourism has served as a lifeline in Cadiz, with average occupancy of its 2,500 plus hotel beds at 60 per cent in July and August.

Director of Hace Hoteles and president of the Cadiz Hotels Provincial Association, Stefan De Clerck, said that these figures are acceptable in light of the current climate, but disastrous compared to 2019.

“Cadiz and Huelva are the coastal regions that have done best in Andalusia this summer,” he said, though while July and August were higher than elsewhere, the immediate future does not look promising.

Predicted occupancy for this month is up to 25 per cent – a far cry from the 90 per cent normally enjoyed.

All hopes are being pinned on spring 2021.

Reyes said one positive is the fact that people want to come back, and “we’ll be here waiting for them” he added.

Thank you for reading this article “Costa del Sol’s ‘ghost hotels’ sit empty with just 20 per cent open for business”.