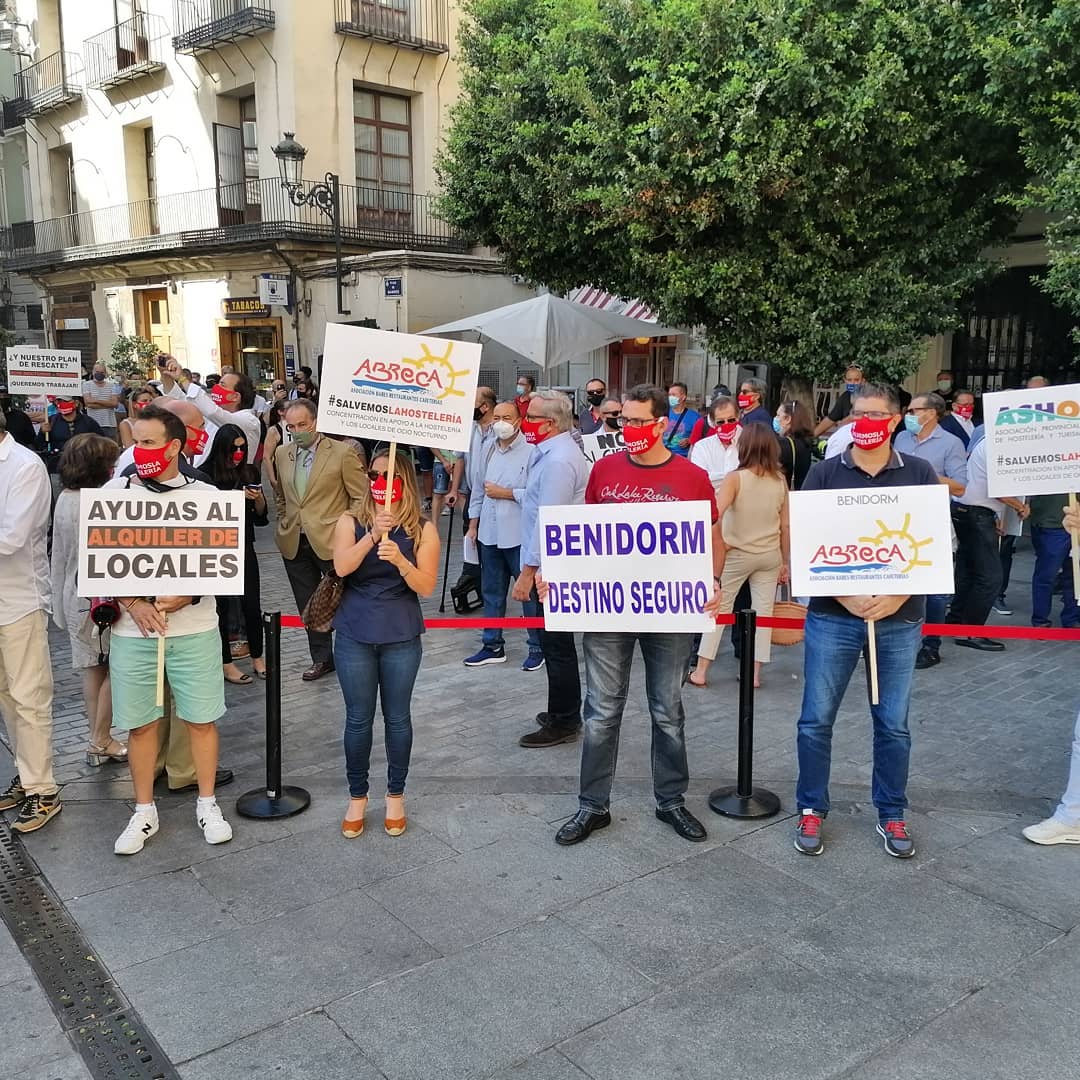 DEMONSTRATIONS: The next planned protest will be a procession in vehicles. CREDIT: Abreca/Cobreca Facebook

Benidorm’s tourism business associations will take part in a ‘Let’s Save Benidorm’ demonstrate in cars, motorbikes and vans on Tuesday, September 29.
They will make their way through the streets of the resort, departing from the Aqualandia car park at 10.30am, finishing at Terra Mítica where the manifesto “ERTE or death, Let’s save Benidorm” will be read.


“This demonstration is the consequence of what we consider to be continuous nonsense, lack of organisation and programming that the Government of Spain has shown during this health crisis,” said a spokesperson in a statement.
And they are appealling “to all workers, entrepreneurs, self-employed, the citizens of Benidorm and the region in general, to join the demonstration.”
The manifesto which will be read demands, as one of the essential measures for the salvation of the tourism sector, “the extension of the ERTE for all sectors involved in the tourism industry”.
In addition, organisers say demonstrators will show “absolute support for the decision made by the CEOE union to paralyse the negotiations, given the government’s refusal to include the hotel industry, commerce, leisure and the subsectors that make up the organization chart of tourism in the extension of the ERTE “.
“If this is the final decision, we consider that the Government of Pedro Sánchez will be responsible for the destruction of employment and the disappearance of a third of the companies in the sector, which today in Spain have more than 800,000 workers charging ERTEs.
“What does the Government intend to do with them as of September 30?,” it was added.
The statement continued: “We know that there are other European countries, such as Germany, which has extended the ERTEs until December 31, 2021, for all sectors and with a 100 per cent exemption on social security expenses.”
The associations warn that if the extension of the ERTEs in the hospitality sector is not approved, there could be a loss of at least 700,000 jobs.
“If this Government does not give us urgent solutions, we will be forced to request to Brussels, the economic intervention of the Spanish Government”.
The following are taking part in the demonstration: Abreca (restaurants), Ociobal ​​(nightlife and dance halls), Aico (commerce and freelancers), Avibe (travel agencies), Aptur (tourist apartments), campsites, taxi, Avalupi (Valencian association of toy libraries and playgrounds), Adislev (association of distribution companies), Horeca, Mute Alicante (mobilisation of show technicians), Hosbec (hotel and tourism business association of the Valencian Community), Astra (Benidorm coach association), together with most of the hospitality and commerce suppliers.
Thank you for reading this article “‘Let’s Save Benidorm’ march in cars planned by the resort’s tourism sector”.
Euro Weekly News is delighted to continue be able to bring you a range of News that doesn’t cost you anything but your internet connection. Whether it’s Local Spanish News or International Entertainment News, we’ve got you covered!