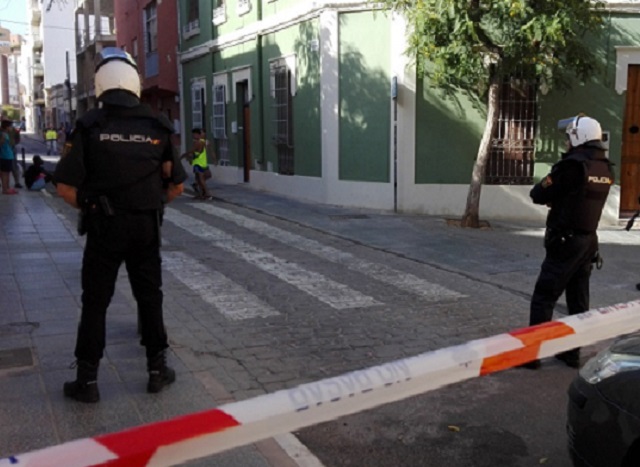 AGGRESSIVE: Police said the 27-year old ignored calls to calm down and instead rushed towards officers CREDIT: Policia de Almeria

POLICE shot a man wielding a knife and threatening passers-by in Almeria city centre at midday on Friday.
A police statement said when officers arrived at the scene on Calle Pedro Jover they repeatedly asked the 27-year old to stop his aggressive attitude and to put the knife on the ground.
But instead of “complying with police orders, he rushed towards the officers, knife in hand, them having to use their regulation weapon”, the statement continues.
It said officers first fired two warning shots, then aimed a third shot at his leg, “managing to repel the aggression and immobilise the detainee.”
The police also reported that once the man was under arrest officers discovered he had three large knives hidden on his person.
The ricochet of the bullets hit two passers-by, causing minor injuries to one in the elbow and one in the calf, police explained.
The 27-year old detainee received medical treatment for a bullet wound to his groin and now faces charges for attempted homicide and threatening an officer.
Police said he has a criminal record for similar offences and is being held in prison.
Thank you for reading “Police shoot man wielding knife and threatening passers-by in Almeria city centre”.
Euro Weekly News is delighted to continue be able to bring you a range of News that doesn’t cost you anything but your internet connection. Whether it’s Local Spanish News or International Entertainment News, we’ve got you covered!
For more Local Spanish News from Almeria, head over the page on to the Euro Weekly News website.
Euro Weekly News, the people’s paper, we lead others follow!