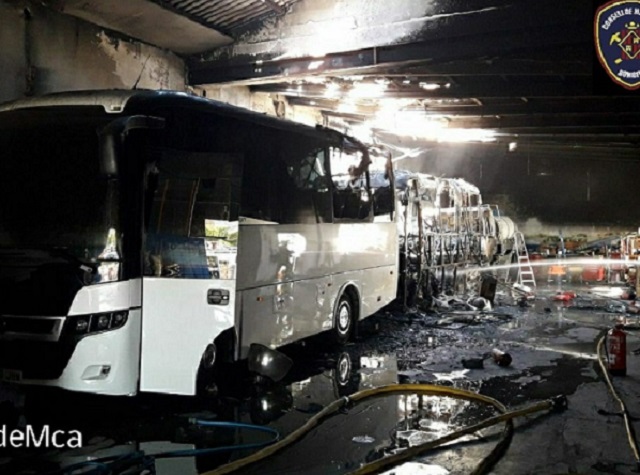 A MAJOR fire has wrecked an Andratx bus company depot and completely destroyed at least two buses.
The fire broke out at the Autobuses Pujol premises in Calle Antoni Mulet in front of the Town Hall mid-morning on Monday, sparking off several small explosions and creating a huge column of smoke which was visible from several kilometres away.
Local residents and workers in the area hastened to get their own vehicles well out the way and people were told to get out of the adjacent warehouses to be on the safe side.
Several firefighting teams from the Calvia and Llucmajor stations battled to douse the flames while Guardia Civil and Local Police cordoned off the area.
By midday the fire was out.
According to reports 21 of people had to be treated for smoke inhalation, two of them at health centres.
Seventeen of those affected by the smoke were employees of the affected warehouses, two were Local Police officers and two were Guardia Civil.
There were no reports anyone was seriously injured.
The authorities have opened an investigation into the cause of the blaze.
Thank you for reading “Major fire wrecks Andratx bus company depot”.
Euro Weekly News is delighted to continue be able to bring you a range of News that doesn’t cost you anything but your internet connection. Whether it’s Local Spanish News or International Entertainment News, we’ve got you covered!
For more Local Spanish News from Almeria, head over the page on to the Euro Weekly News website.
Euro Weekly News, the people’s paper, we lead others follow!