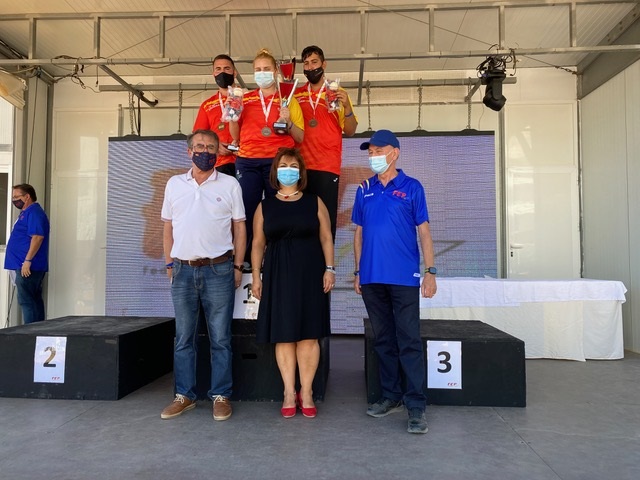 MOJACAR is playing host to a national boules championship over the coming weeks.
The singles rounds of the 16th Spanish Petanque Championship have already started off with the first of three heats.
Playing under strict Covid-19 safety regulations set up jointly by the Spanish Petanque Federation, the Sports Council,and the Health Ministry, over 90 players from federations all over Spain took part in the men’s, women’s and youth categories
This was the first important sporting event since the health crisis began, and the first organised by the Spanish Federation.
It proved to be a great success, both in respect to the rules laid out and from a sporting point of view, with all competitors offering a high standard of play and ensuring a top quality show.
In the men’s category, Josep Guasch Orozco from the Catalan Federation was the winner, with Alejandro Cardenas, from the Andalucian Federation in second place.
Carolina Pascual, also from the Andalucian Federation, took the Women’s title, with the Aragon Federation’s Trinidad Luquin, placed as runner-up.
Francisco Rodriguez from the Balearic Federation, took first Youth position with his fellow association member Sergio Ruiz, as his runner-up.
The awards ceremony was held at the championship venue, the Servigroup Hotel Marina Playa.
Mojacar’s Sports Councillor,Ana Garcia, along with the Spanish Federation President and Vice-President, Antonio Arcas and Luis Jimenez, did the honours of presenting the trophies.
Ana Garcia, who was there to see the rounds played out, pointed out the importance of continuing to hold these events on the sports calendar wherever possible, if health and safety regulations can be ensured.
She also congratulated the participants on their high level of play and added how delighted Mojacar was to have the opportunity to host such an important sporting event.
The next match, also in Mojacar, will take place from this coming Friday October 2 to Sunday October 4, with the launch of the Spanish Petanque Championship for Women’s and Men’s Triples.
We hope you enjoyed this article “Mojacar plays host to national boules championship”.
Euro Weekly News is delighted to continue be able to bring you a range of News that doesn’t cost you anything but your internet connection. Whether it’s Local Spanish News or International Entertainment News, we’ve got you covered!
For more Local Spanish News from Almeria, head over the page on to the Euro Weekly News website.
Euro Weekly News, the people’s paper, we lead others follow!