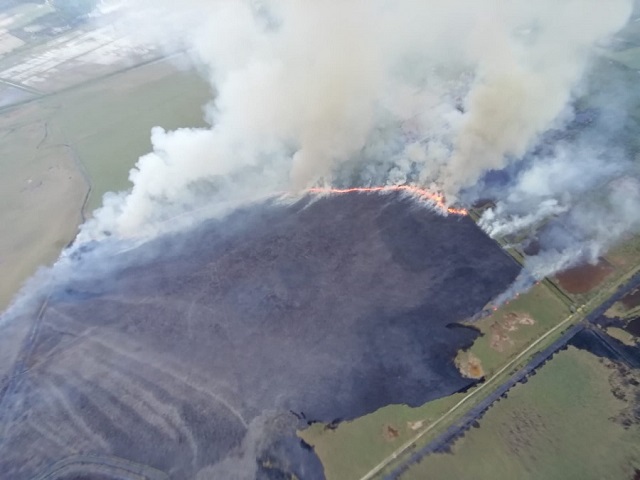 THE weekend’s devastating wildfire has left a huge chunk of the s’Albufera natural park charred and blackened.
The blaze broke out early on Friday evening and was fanned by intense gusts of wind of up to 100 kilometres per hour which started up in the early hours of Saturday morning. It forced the evacuation of more than 30 people from their homes and destroyed three properties, damaging the exteriors of a couple of others.


By Saturday morning 100 firefighters backed up by nine planes and helicopters were battling to stop the fire from advancing, later joined by two amphibious aircraft.

By the time the firefighting teams had fully extinguished the flames late on Sunday afternoon, helped by overnight downpours, it had burned through some 440 hectares of reeds.
Of this, between 80 and 90 per cent falls within the border of the natural park, representing about 25 per cent of its total surface area, explained park director Maties Rabassa.
He said  the wildfire was the second worst to ever affect the protected zone.


Balearic regional Environment minister Miquel Mir said that while the reed itself would probably recover relatively quickly from the scorching, the damage to some species of wildlife which usually inhabits the park could be more long-lasting.
“Last year 80 hectares were burned and it has grown back. The impact on fauna is another thing”, he pointed out.
Mir also made a point of expressing his “infinite” gratitude to all those involved in firefighting effort, commenting on social media about the “enormous human effort there is behind the operation.”
There is speculation that it was human action, either intentional or unintentional, which sparked off the blaze.
According to Spanish press reports, the Balearic regional Environment ministry has confirmed that initial investigations point to this possibility, and that the fire could have started from two different points.
Officers from the Guardia Civil’s SEPRONA Nature Protection Service, together with Environment experts, are carrying out a full investigation to determine the cause. The investigation includes questioning people who were in the park at the time the fire is thought to have started up.
Thank you for reading “Weekend’s devastating wildfire leaves huge chunk of s’Albufera natural park charred and blackened”.
Euro Weekly News is delighted to continue be able to bring you a range of News that doesn’t cost you anything but your internet connection. Whether it’s Local Spanish News or International Entertainment News, we’ve got you covered!
For more Local Spanish News from Mallorca, head over the page on to the Euro Weekly News website.
Euro Weekly News, the people’s paper, we lead others follow!