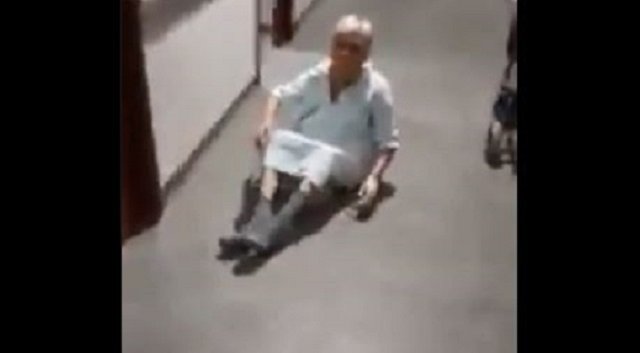 NOT FUNNY: The woman recording the video appears to make a joke out of the elderly woman’s situation CREDIT: Guaje Salvaje Twitter @GuajeSalvaje

OUTCRY over a Madrid care worker’s humiliating treatment of an elderly resident could lead to charges.

A video doing the rounds on social media shows the frail looking elderly lady sitting on the floor at the Las Vegas residence in Ciempozuelos and trying to pull herself up by holding on to a wheelchair.

Rather than helping her, the woman filming the video on a mobile phone appears to make a joke out of the situation.

“We’ve arrived at the house of horror,” she can be heard saying.

She also tells the elderly resident to leave the wheelchair alone, while the old lady, looking distinctly upset and pitiful, stretches out her hand to the woman doing the filming.

According to Spanish press reports family members of the care home’s residents have officially reported the employee.

Press also reported that the regional government is sending a team of inspectors to determine what happened at the Madrid care home and whether there are grounds for taking further action, and whether the matter should be put in the hands of the public prosecutor.

The regional administration is quoted as saying that that it is “not going to tolerate any kind of mistreatment and is going to pursue any action which represents a violation of the rights of elderly people who reside in the region’s centres.”

Ciempozuelos council has also condemned the video and said it is looking at legal action.

Posting on social media, the local authority expressed its full support for the elderly lady’s family and those of all the other centre’s residents, and also its support for “all the workers who do a good job of caring every day for our elderly.”