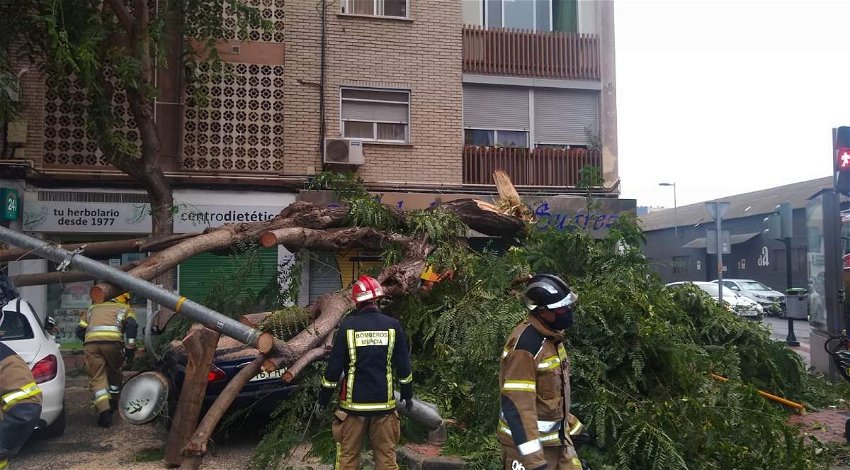 Storm Alex has wreaked havoc in Spain’s Murcia region today (Friday, October 2) with more than 260 incidents causing injuries, damage and disruption.
WINDS across the region reportedly reached up to 100km/h, with Murica itself the hardest hit.
According to the 112 Emergency Coordination Centre, the vast majority of the damage was caused by fallen trees or branches, resulting in a total of 264 incidents.

The Murcia tram service was interrupted due to fallen branches on the tracks forcing the city council to put on an alternative bus line.

In Plaza de Santo Domingo, fierce gusts of wind swept through furniture on the terraces of restaurants and bars.
In one video posted on Twitter, a woman can be seen thrown to the floor and dragged along the ground by an umbrella.
And at the junction between Calle Cronista Carlos Varcárcel and Primo de Rivera, traffic lights were blown over.
Firefighters and council workers spent hours in Avenida Miguel de Cervantes removing branches that had fallen onto vehicles.


The Local Police have advised the public to avoid areas with trees, not to walk next to walls, to remove furniture from terraces and balconies, collect awnings and umbrellas and drive at a moderate speed.
And the mayor, José Ballesta, urged citizens to “exercise great caution” through social networks, adding that both firefighters and police are trying to “restore the situation to normal.”
The Region was put on an orange alert and Spain’s weather service, Aemet, warned that waves could reach four meters high in coastal areas.

For this reason, the General Directorate of Citizen Safety and Emergencies has advised that “if you are in maritime areas, stay away from the seawalls, beaches, breakwaters and other places near the coastline, which may be affected by high tides and waves usually generated by the intensity of strong winds ”.

“Avoid parking vehicles in areas that may be affected by waves”, added the General Directorate, stressing that, “in these situations, the sea acquires extraordinary conditions and can drag you if you are in nearby places.”
The same source said: “Don’t risk your life trying to capture a spectacular image; avoid going out to sail and watch the moorings of the boats.”
In Costa Blanca’s Valencia region, a 71-year-old woman was injured when a tree fell on her. She was taken to Hospital La Fe suffering “multiple trauma”.
A similar incident in Aldaia left a woman, 36, “hurt” and in “shock”, and requiring treatment at a hospital in Manises.
Last night, Aemet issued a yellow alert for Spain’s Costa del Sol with very strong winds expected and scatters of rain in some areas.
Thank you for reading this article “Storm Alex wreaks havoc in Spain’s Murcia region”.
Euro Weekly News continues to bring you a range of News that doesn’t cost you anything but your internet connection. Whether it’s Local Spanish News or International Entertainment News, we’ve got you covered!