VIDEO: Five arrests and €1.3 million worth of assets seized in major operation 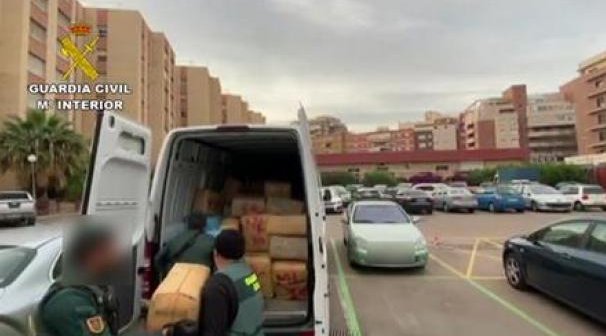 Five arrests and €1.3 million worth of assets have been seized in major police operation.
Five members of a criminal gang suspected of distributing hashish along the coast of Almeria have been arrested and more than four tonnes of hashish confiscated.
The combined value of the seized drugs, and other ‘movable and immovable property’ together with the content of the network’s bank accounts is around €1.3 million, according to the Guardia Civil.


An investigation began in February, when the police learned of the existence of “a network that would be introducing large amounts of hashish with semi-rigid boats off the coast of Almería, more specifically in the area known as Punta Entinas-Sabinar”.
Given this information, officers organised a surveillance operation in the area to “detect vessels that could be suspected of engaging in drug trafficking.”
In mid-April a semi-rigid boat was sailing at low speed through the Punta Entinas Lighthouse, and was followed.
At the same time, movements were observed in an area of ​​the beach that made officers suspect they could be waiting for the boat to unload illegal packages.
Once it was confirmed that a cache had been made, several patrols intervened, arresting one person who was unloading the packages. A search of a nearby lorry uncovered 105 bales of hashish weighing 3,150 kilos.
In July, in the same area, the police found an all-terrain vehicle, previously stolen, with 31 bales of hashish, weighing approximately 930 kilos.
The investigations coontinued and further members were identified and five searches were carried out in various locations in the Almeria province.
IDuring these raids, five vehicles, communication and computer material, documentation, cash and 56 bottles of gasoline were seized.
The investigation then focused on the properties and assets of the suspected leaders of the group -two brothers – two accounts with a balance of €118,000 and 11 properties valued at more than €1,135,000.
Thank you for reading this article “VIDEO: Five arrests and €1.3 million worth of assets seized in major operation”.
Euro Weekly News continues to bring you a range of News that doesn’t cost you anything but your internet connection. Whether it’s Local Spanish News or International Entertainment News, we’ve got you covered!