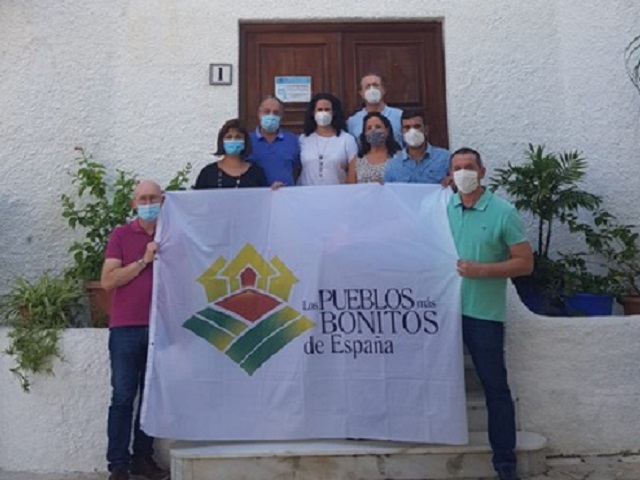 MOJACAR has celebrated the 10th anniversary of the Prettiest Villages in Spain initiative.
To mark the occasion members of the local council gathered at the Town Hall entrance on Friday to raise the flag of the Prettiest Villages in Spain association, of which Mojacar has been a member since 2013.
Tourism councillor Emmanuel Agüero read out a manifesto in which the association sends a message of encouragement and hope in the face of the current difficult situation which the country is experiencing due to the health and economic situation created by the Covid-19 pandemic.
The association emphasized the attention given to rural areas this year. It commented that many people have discovered the excellence of the villages, of the primary sector, and the advantages of living, investing and working in rural areas, that this allows for greater free time and greater guarantees of safety and quality.
Among the future challenges for rural areas the most important is telecommunications, the association says.
It maintains that the improvement in connectivity to promote rural areas as a base for national and international work would at the same time serve as an essential platform for sustainable, year-round tourism.
Emmanuel Agüero highlighted the importance for Mojacar of being a member of the Prettiest Villages in Spain association.
According to the council the “repercussion from this quality stamp is a valuable factor in the notable increase in visitors which this locality has registered since its incorporation.”
The Prettiest Villages in Spain Day is dedicated to defending the conservation of the artistic and cultural heritage of the most attractive locations in the country and the role they play in both sectors and in tourism.
We hope you enjoyed this article “Mojacar celebrates 10th anniversary of Prettiest Villages in Spain”.
Euro Weekly News is delighted to continue be able to bring you a range of News that doesn’t cost you anything but your internet connection. Whether it’s Local Spanish News or International Entertainment News, we’ve got you covered!
For more Local Spanish News from Almeria, head over the page on to the Euro Weekly News website.
Euro Weekly News, the people’s paper, we lead others follow!