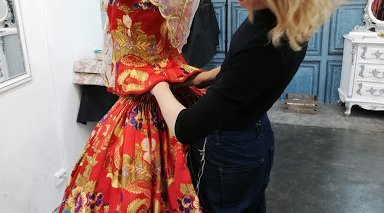 IN TATTERS: Traditional dressmaking in Valencia has been hit hard by the pandemic as the city's fiestas are cancelled. CREDIT: GoMap Valencia

More than 100 traditional dressmakers will demonstrate in black to ‘mourn the loss of trade’ in Valencia tomorrow (Tuesday, October 6).
WITH the traditionl Spanish clothing industry in tatters as a result of cancelled fiestas due to the health crisis, the Valencian Clothing Business Association has called for a ‘silent demonstration’ to take place through the city centre streets from 11am tomorrow morning, meeting at Plaza de San Augustin.
The motto is “Clothing is also heritage, it’s dying”, and more than 100 dressmakers and other tradespeople involved in the sector are expected to take part.
A spokesperson for the association said the demonstration represents “a sign of mourning for the severe crisis that the sector is going through due to the situation generated by Covid-19 “.
They claim the traditional dressmaking sector has seen a reported 99 per cent drop in trade since March, and are calling on the government to do something to stop the “death of an important industry” which is made up of “artisans and family businesses that are also the heritage of Valencia”.
In addition, the association is demanding aid and subsidies, claiming they are suffering from a “lack of support and backing”.
And members are calling for “an official commitment that the Fallas of 2021 will be celebrated, always complying with all sanitary and public health measures and protocols, as well as all kinds of shows and cultural events”, President of ASCIVA, Irene María Sancho, told Las Provincias.
This follows an annoucement from Valencia’s Minister of Health, Ana Barcelo, that the Fallas – a traditional celebration held in March which attracts hundreds of thousands of people to the city – will not take place without a vaccine.
Thank you for reading this article “More than 100 dressmakers will demonstrate in black to ‘mourn the loss of trade’ in Valencia”.
Euro Weekly News continues to bring you a range of News that doesn’t cost you anything but your internet connection. Whether it’s Local Spanish News or International Entertainment News, we’ve got you covered!