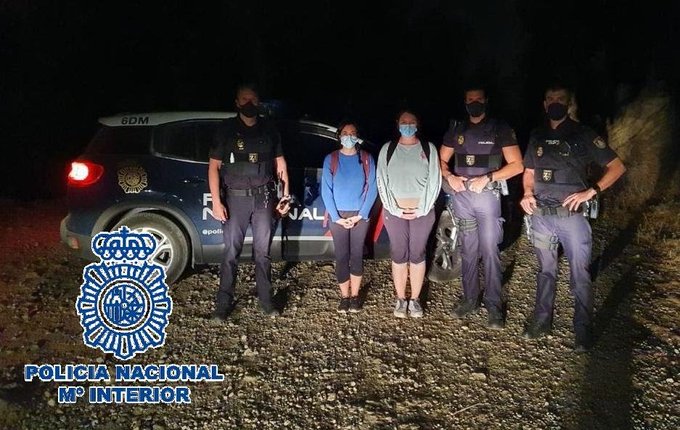 EXHAUSTED: The two women were tired but 'in good health'. CREDIT: Policia Nacional

Two Irish women have been found safe and well after a mountain search on the Costa del Sol.

They managed to contact a friend who called emergency services, and a rescue party was sent to the scene.

After hours of searching, the pair were fortunately found ‘in good health’, though showing symptoms of exhaustion.

The Malaga Provincial Police HQ, confirmed it was through a call to 112 that it was learned that the two women had been lost in Los Montes.

They said the hikers, who did not know the terrain, became disoriented and alerted a friend, who in turn contacted the emergency services.

“The 091 room of the National Police then established a device for locating the women based on the location coordinates that the girls provided with their mobile phones”, said a statement.

Officers in the search party, who contacted the women reguarly to check their status and ask them to stay fixed at the same point, faced “a complex search through the multitude of existing trails in the area” until they were found “exhausted” but “not in need of medical assistance”.

Thank you for reading this article “Two Irish women found safe and well after mountain search on the Costa del Sol”.

Euro Weekly News continues to bring you a range of News that doesn’t cost you anything but your internet connection. Whether it’s Local Spanish News or International Entertainment News, we’ve got you covered!