Woman falls to her death from Axarquia's Caminito del Rey 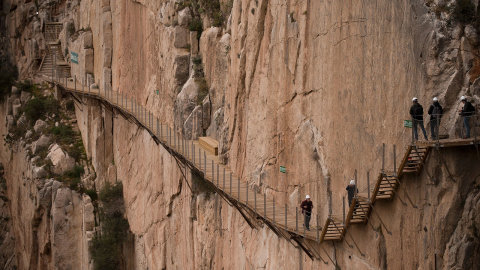 WOMAN falls to her death from Axarquia’s Caminito del Rey just days after the new suspension bridge was inaugurated
A woman in her 50s died on Tuesday, November 3 after losing her balance and falling from over 50 metres. She was walking along a section of the Caminito del Rey near the Almanchare river when she fell.
Emergency personnel from the Mountain Rescue and Intervention Team (EREIM) rushed to the scene at around 2.30pm a few metres from the Saltillo Bridge, and a helicopter had to be used to evacuate the body.
The Saltillo Bridge was inaugurated on Monday, October 26 as one of the three longest suspension bridges in Spain, after Cahorros in Granada and Sanavastre in the Catalan Pyrenees. Around 3,000 people have embarked on this route in the first seven days of the opening of the walkway, a few metres from the place where the woman fell.
The Malaga Provincial Council has described the requirements for travelling on this perilous walk, and has publicly asked visitors to be “responsible” in the use of this natural area.
________________________________________________________________________
Thank you for taking the time to read this news article “Woman falls to her death from Caminito del Rey”. For more UK daily news, Spanish daily news and Global news stories, visit the Euro Weekly News home page.
Euro Weekly News is delighted to continue be able to bring you a range of News from around Spain in English and Global News live as it happens.
Euro Weekly News doesn’t cost you anything but your internet connection. Whether it’s bringing you the local Spanish news or the International news today, we’ve got you covered!
Euro Weekly News, the leading free local and national newspaper in Spain, the people’s paper, we lead others follow!