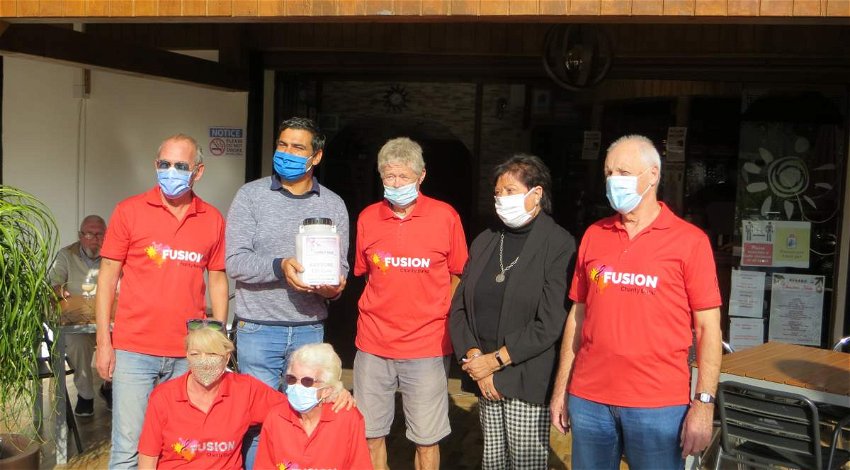 TURRE’S Fusion Charity Band recently presented local mayor, Martin Morales, with €530.
The money had been raised that afternoon at Bar Restaurant Solare, where the presentation took place, and the money will go directly to Turre town hall’s Community Food Bank programme.
Marisa Freeman, who works at the town hall was also present, as she is responsible for co-ordinating the Food Bank.
The Turre-based Fusion Charity Band is composed entirely of expats – Alan Taylor (singer), Lesley Darling (ukulele), Michael Dawson (cajonista and occasional singer), Pamela Taylor (ukulele) and Bob Blackburn (ukulele) – who are all retired, with the exception of Lesley who works at the local vet’s, Clinivet.
Until about three years ago they had never played a musical instrument or been involved in any musical activities, they admitted.
However, when musician Stephen Gear started a ukulele class, one or two who now belong to the Fusion Charity Band went along and became interested in learning to play the instrument.
One thing led to another and eventually a band was formed.  Members play only for fun and wherever they play, a collection is taken for local charities.
The band explained that the Bar Restaurant Solare staff had been very generous in donating their tips jars, which contained a significant a significant amount of money, while Sami Samran was especially supportive, they said.

Thank you for taking the time to read this news article “Fusion Charity Band’s fun fundraiser makes €530 for Turre’s Food Bank.” For more UK daily news, Spanish daily news and Global news stories, visit the Euro Weekly News home page.
Euro Weekly News is delighted to continue be able to bring you a range of News from around Spain in English and Global News live as it happens.
Euro Weekly News doesn’t cost you anything but your internet connection. Whether it’s bringing you the local Spanish news or the International news today, we’ve got you covered!
Euro Weekly News, the leading free local and national newspaper in Spain, the people’s paper, we lead, others follow!