Almeria waterways go with the flow 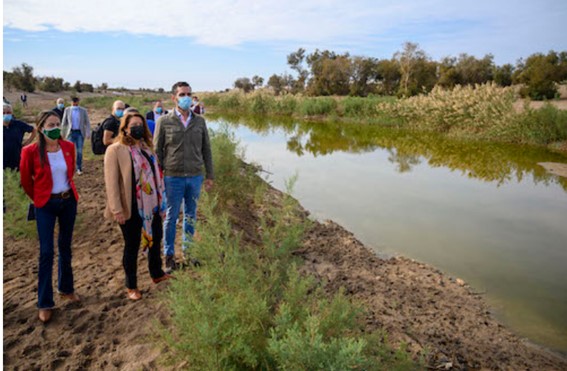 THE regional government cleared more than 115 stream and riverbeds in Almeria province, removing 6,300 tons of vegetation, silt and litter.
Carmen Crespo who heads the Junta’s department of Agriculture, Livestock, Fisheries and Sustainable Development, recently visited Rambla Morales just outside Almeria City.
The regional government has restored 184 kilometres of the province’s streams and rivers, spending what Crespo described as a “historic” €10.2 million on the project.
This environmental maintenance was long overdue, she admitted.
“The president personally took on this commitment during his visit after 2019’s DANA storms,” Crespo pointed out, referring to the Junta’s president Juanma Moreno.
“I’d also like to stress the ecological importance of this work,” she continued.
“Not only have the waterways been cleared but we have also replanted 120,000 trees and shrubs – all belonging to native species – bringing about a complete environmental renewal.”
Crespo, who was accompanied by Almeria City’s mayor Ramon Fernandez-Pacheco, thanked not only the local administration for their cooperation, but also the area’s farmers and growers.
They too had helped in conserving these zones through their Compromiso Blanco project that was directed at recycling their agricultural plastics, she said.
“We aren’t only talking about safeguarding Almeria’s image but something much more important, reducing risks and increasing the safety of the local population during periods of torrential rain,” Crespo added.

Thank you for taking the time to read this news article “Almeria waterways go with the flow.” For more UK daily news, Spanish daily news and Global news stories, visit the Euro Weekly News home page.
Euro Weekly News is delighted to continue be able to bring you a range of News from around Spain in English and Global News live as it happens.
Euro Weekly News doesn’t cost you anything but your internet connection. Whether it’s bringing you the local Spanish news or the International news today, we’ve got you covered!
Euro Weekly News, the leading free local and national newspaper in Spain, the people’s paper.  We lead, others follow!