Nightclubs In Madrid Carry On Regardless Of Coronavirus 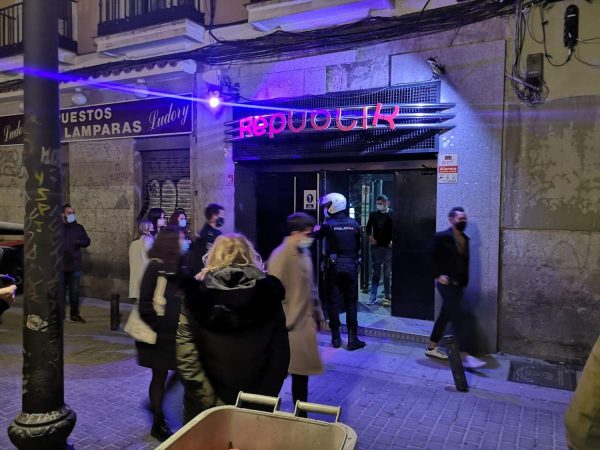 Nightclubs In Madrid Carry On Regardless Of Coronavirus. image: Twitter

NIGHTCLUBS In Madrid Carry On Regardless Of Coronavirus says an undercover report from Spain’s Capital City.

Just last Saturday, November 14, at around 8.22 pm, Policia Nacional officers pulled up, apparently with sirens wailing, and marched into a well known Madrid nightclub, as though carrying out a raid, yet 15 minutes later they left, with no fines issued, as the club is complying with all the local lockdown regulations, “We received a call but everything is in order”, said one officer outside the club.

A 28-year-old Madrid partygoer, speaking to El Pais newspaper, on condition of anonymity, told reporters, “I took ecstasy with someone else in the bathroom. Electronic music, drugs, and partying, just like in the times before the pandemic”, continuing that he witnessed people having sex in the bathrooms and popping pills.
Describing the scene last Saturday, November 14, “The DJ turns off the music and tells the crowd, please, everyone go to your table, and put on your face masks. The police are going to come in and there are journalists outside.”
The anonymous source went on, “As the DJ made his announcement, young people were dancing, shirts off, no face masks, sweating and yelling, to the beats of Juseph León, a perfect environment for the spread of the virus”, and once the police are gone, the partying resumes to the way it was before they came in.

It seems the police are powerless, as the club is actually adhering to the local government order of October 14, that states venues can open their doors, as long as they abide by the safety measures of no dancing, everybody must be seated, and the venue must close at 12 midnight when the curfew begins, but of course, these rules can easily be neglected if the police are not present, and 90 minutes later, they return and do catch people breaking the rules.

Nightclubs are now opening at 6 pm, and closing at midnight, but apparently, it is not so easy to gain entry, as they know they are being watched by undercover journalists and reporters, with door staff suspicious of anybody they do not know, and some clubs reputedly have a blacklist of well-known journalists, and strangers are told the club’s policy is one of “invitation only”.

Thank you for taking the time to read this news article “Nightclubs In Madrid Carry On Regardless Of Coronavirus”.