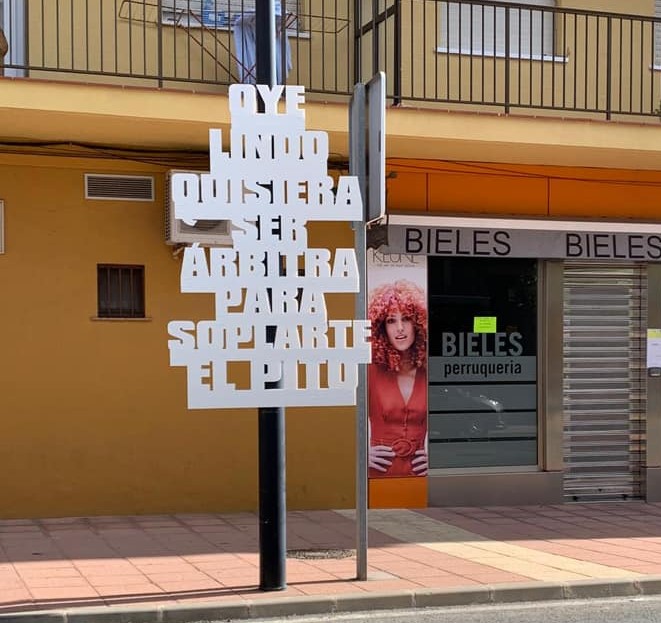 A woman has confessed on Facebook to pulling down “offensive” and “vulgar” domestic violence posters, and said “she would do it a thousand times”.
EL VERDER council placed the posters around the town which were immediately slammed for being “vulgar and a total lack of respect for women.”
“I wish I were a vampire so you could stake me”, and “I’d like to be a referee so you can blow your d**k out”, are two of the slogans used in the urban cultural awareness campaign to mark International Day for the Elimination of Violence Against Women on November 25.
Vanessa Waylett Argon took to Facebook to admit she pulled down the posters, but with “no violence”, simply leaving them resting on the floor.
She said: “I was thinking about my 12-year-old niece. I would not like her going down the street seeing such violent messages.It wouldn’t occur to me to say something like that.”
“The message that a campaign against gender violence is presumed to give is not this, they have been wrong because what the signs posted on the streets of El Verger creates is hatred.”
In her opinion, and more than 100 people who supported her “demonstration” on Facebook, the initiative of the artist Vero McClain “encourages young people to use this type of language, quite the opposite of what should happen with this type of campaign”.
The council has confirmed no action will be taken against Waylett Aragon, pointing out she “exercised her right to freedom of expression” and thanked her for “not destroying the posters because they can be used for a future exhibition”.
Thank you for taking the time to read this news article “Woman admits pulling down “vulgar” domestic violence posters”. For more UK daily news, Spanish daily news and Global news stories, visit the Euro Weekly News home page.