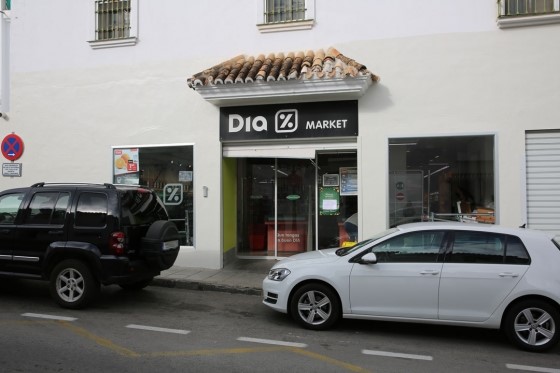 A Dia supermarket on Avenida de México, in Mijas village, was robbed at gunpoint yesterday, Monday, November 23, by a hooded robber who forced the checkout lady at gunpoint to hand over the contents of the cash register, approximately 400 euros, before making off on foot.

The robbery took place while customers were going about their shopping, and as the criminal was brandishing his gun, the six customers reportedly took cover at the back of the store, along with two members of staff, in what must have been a truly frightening experience for them, with the premises closing immediately after the incident was over.
One employee described that the armed criminal, “looked like a young man, of approximately 1.66 metres tall”, and it is still not known if the robber had a getaway vehicle waiting outside, or if he fled on foot.

Luckily, there were no casualties or other material damage, and the Civil Guard and Mijas Policia Local were on the scene within minutes of being called, and they are still conducting an investigation into the shocking incident, which is, of course, a huge topic of discussion today among the local residents and customers of the supermarket.

Luisa García, a regular customer, stated, “Luckily, everything has been just a scare, although the sensation of fear is horrible”, adding, “I did not imagine that this could happen here, we will have to come to the supermarket with a stick in our bags”.

A neighbour, Tamara Tomosa, said, “I heard screams from a woman who was running out of the supermarket because just at that moment I was leaving the house to come to do my shopping at the supermarket. This has never happened here”, whilst Paqui Ruiz, said she found out what had happened “because my daughter called me while shopping here and told me about it. What a scare! No longer can one go peacefully to the shop! I’m very sorry for what happened to the employees and the people who were there at that time because if that happened to me I don’t know how I would react”.

Thank you for taking the time to read this news article “Mijas Supermarket Robbed At Gunpoint”.