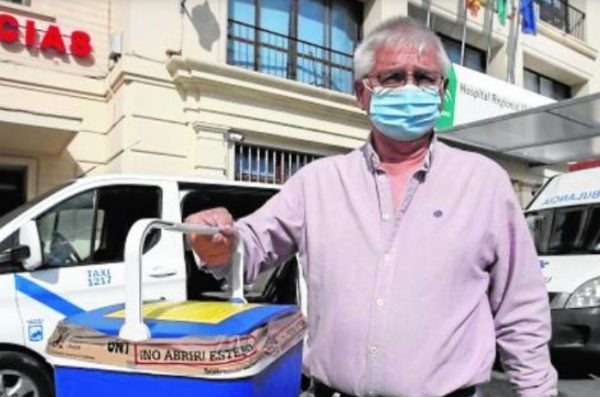 THE Malaga Taxi Driver Who Delivers Human Organs all over Andalucia and Spain.

Antonio de Los Ríos, was an everyday taxi driver in Malaga province when he answered an advert 25 years ago, that changed his life, doing a humanitarian job that has kept him very busy ever since.
Miguel Ángel Frutos, the then transplant coordinator for the Hospital Regional in Malaga, put out a request for a person to help them, with only one condition laid down by The Andalusian Health Service (SAS) for the applicant, they would have to be available 24-hours a day, to courier human organs at any hour of the day, for life-saving operations.

A shy man by nature, Antonio says, “I’m telling my story because I want to encourage people to become donors”, having witnessed first-hand, for almost three decades, how a generous body part donation can help save the life of another person, in his transportation of hearts, kidneys, livers, bones, pancreases, and even eyes, in the refrigerated box in the back of his car, in a life-or-death dash to get the organ to the destination in time, without being reckless on the road, “You have to go a bit faster than usual, but in 25 years I have only been fined twice, and I didn’t have to pay because I appealed to the Traffic authorities. You know the road, and you know where you can accelerate and where you can’t,” he says, “It was more dangerous in the old days when the roads were in a bad state”.

Knowing Andalucia by heart, Antonio has also taken organs to Badajoz, Murcia, Seville, and Barcelona. He has never studied medicine but knows all the relevant medical jargon, and about “ischemia time”, which is the critical time-frame that an organ remains useable outside the human body, after being removed, making Antonio a key element in this process, with his ability to reach the destination safely, within the time-frame, “The heart has the shortest time, but they don’t transplant those in Malaga. They only remove them so they can be transported where they are needed. Here, they carry out transplants of the liver, pancreas, and kidney”.

A man with some wonderful anecdotes about his time on the road, Antonio knows personally all the top surgeons who have worked in Malaga, but now, with only three years to go before his retirement, and the pandemic creating many problems, Antonio is pondering a more relaxed way of life, and spending time with his three daughters and five grandchildren, “Five and a half, actually, because another one is on the way,” he says.

Thank you for taking the time to read this news article “The Malaga Taxi Driver Who Delivers Human Organs”.