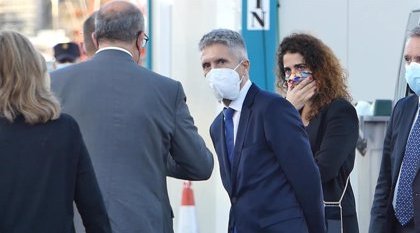 Luis Salvador, mayor of Granada, has today, Tuesday, December 8, demanded an explanation as to why a flight full of immigrants was sent from Gran Canaria to Granada, last night, without his knowledge, criticising Fernando Grande-Marlaska, the Minister of the Interior, “It does not seem very normal that in a pandemic like the one we are suffering, the minister boards a flight, then sends immigrants to the mainland, releasing them in Granada, and leave them to their free will, and also, without warning”.
Salvador sent footage to the media, taken from “videos on WhatsApp”, that were spread virally on Monday night, showing a chartered flight from the Canary Islands to Granada, with immigrants unboarding, “without any type of police control “, and, ” with nobody waiting upon arrival, and you can see then being asked if they had PCR tests done, and they said no”.
The mayor reported he had asked Inmaculada López, the subdelegate of the government in Granada, and, “The answer is that they came by order and that therefore, they could circulate wherever they wanted, we are in a situation in which there are mobility controls, there is a requirement of rules that the population has to respect, there are security measures in place, so why is this being done, directly releasing immigrants at their free will?”
“It does not seem right that the Minister of the Interior can take this action, without notifying any authority, without notifying us, the Granada City Council, nor, I imagine, advising the Junta de Andalucía and acting in that way”, stating that Granada City Council intends to make a formal complaint about this action.
Macarena Olona, from the Vox political party, referring to the immigrants, said that Marlaska had shown “manifest negligence”, and should maybe, “welcome them into his home”, stating the flight was “without apparent sanitary control, and therefore endangers the lives of the people of Granada by not taking the appropriate measures to avoid infections by Covid-19”.
____________________________________________________________
Thank you for taking the time to read this news article “FOURTEEN cars burn in different streets of Fuengirola”.
For more UK daily news, Spanish daily news, and Global news stories, visit the Euro Weekly News home page.